Just venting a bit; this am when driving my kids to school, a big truck hit my car; I was lucky to avoid any uglier things.
I guess the truck driver was distraught; just swerved into my and I saw the bigger than my civic truck wheel with those huge lug-nuts go at it like the Ben-Hur movie. If he had not veered back into his lane I tbink the truck would have craweled on top of my car or pushed me against the parked vehicles.
The driver was apologetic, he said "didn't see you" other drivers honked at him as I did. My daughter was shocked; my son, well he's a teenager and made things look the world was ending(well now I'm like my son, so you get my point).
$3500.00 in damages and that's getting used parts!!
He gave me his info and call his employer to let them know; I contacted his employer and seem they want to come to an amicably end... That means settle outside an insurance claim because that would raise the cost for them.
I had to get new tires today; the damaged tire has two holes.
I took advantage of the Costco sale couple months back and paid fir the tires; juat wanted to wear out the ones I had before the winter.
Costco called me to inform that a stud was stripped and it could break; curiously, the stud at the tire I changed in the morning right after the accident. None of the studs were in bad condition; I pulled the jack out of the messy trunk, loosened the nuts, lifted the car and changed the tire; that easy. I think is a common practice at Costco’s tire shop to inform the customers the threads are stripped when they really messed one way or another and they make sure to print it to make sure tou were “aware” it was that way... 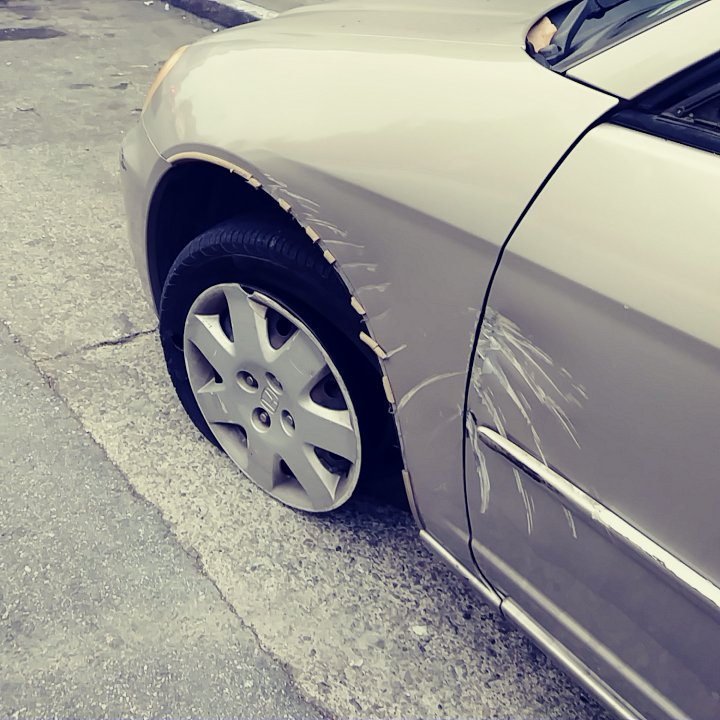 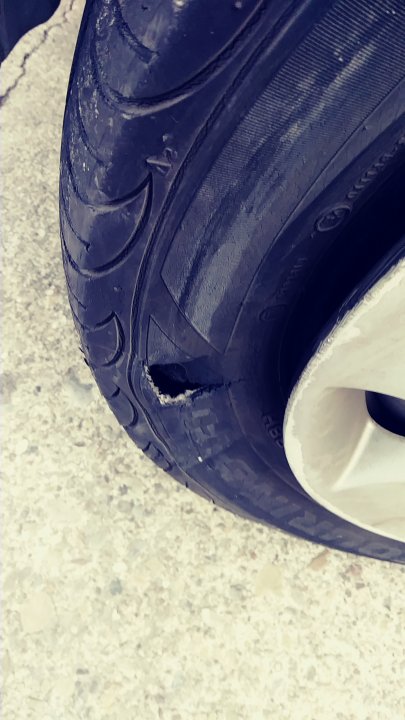 Good thing you and your family are not hurt!

Yikes! I'm glad you are all OK though. Hope it all works out. Make sure you still make a report to the cops just in case they don't end up settling outside of insurance, so you have some evidence of it.
K

Glad you’re okay. At least the rig driver was responsible in this case

We are ok, it was a very scary thing to look at that huge wheel with the sticking-out bolts spinning right towards me and first knocking off my mirror...
A good thing came out of the accident; my daughter was very shocked and crying, I told her she could stay with me for the day if she didn’t feel like going to school; my son (whom is normally a jerk with her) talked to her comforted his little sister. A while after changing the tire took my kids to school and my girl wanted her brother to walk into the school’s office with her; that meant a lot to me.
S

Staff member
Glad you're safe Mario, but geeze they want to go outside of insurance on this? I'm not sure that would raise insurance more than the cost to repair unless they owned an auto-body shop and could do it for cheap.
K

don't do it!
utilize all available insurance opportunities!
don't be cheap and don't let them bully you into submission
they are in the wrong, and your kids have been affected
you deserve full compensation

First I'm glad that you and your family are all well, definitely could be a traumatic experience for the kids. I do agree with Kensington, probably best to go with Insurance.

I was involved in a small accident before. The lady was super nice and mentioned that her brother owns a body shop, and if we can handle this privately without insurance. Trying to be understanding about Insurance cost, I said ok.

I spent soo much time trying to reach her afterwards to get my car fixed it became a pain. When I finally reached her, she eventually gave me the address to the body shop. So taking a day off of work, I went to the body shop to make arrangements. Guess what? The body shop was like, who are you? I don't know the lady you are talking about. So I tried to call her again, no response.

This effort took approximately 2-3 months, until I finally decided to call my insurance.

Just saying, sometimes it's good to be nice and understanding but you have no idea what the other party's intentions are. And sometimes there may be damage "chiropractics", that you don't really notice right away or even a week later. I would go through Insurance just to be on the safe side.

xcaret said:
We are ok, it was a very scary thing to look at that huge wheel with the sticking-out bolts spinning right towards me and first knocking off my mirror...
A good thing came out of the accident; my daughter was very shocked and crying, I told her she could stay with me for the day if she didn’t feel like going to school; my son (whom is normally a jerk with her) talked to her comforted his little sister. A while after changing the tire took my kids to school and my girl wanted her brother to walk into the school’s office with her; that meant a lot to me.
Click to expand...

A life lesson that ended up to probably be for good. That's a nice silver lining to this all for sure. Really sweet to see the support of siblings. I bet they learned a lot about themselves and each other too.

I also agree with a lot of the insurance advice from the above. I'd love to be optimistic, but at the end of the day, going through insurance is the cleanest way. Most people who want to settle outside of insurance try to get away with it and prolong it all as much as they can. Especially as a company vehicle, just deal directly with their insurance and you won't have to go through any trouble. If it takes a few days, insurance will even get you a rental car. Overall, your insurance company will fight for you here as well (if they're good).
K

save the "nice" way for people you know
S

Staff member
IIRC, you're supposed to file a police report if there is over $500 in damages. And even if you don't want to go through insurance, it's something nice to have official in case the guy does try to stiff you.

I believe in Ca you also have to let DMV know. Not 100% sure. I'd make them pay. Here is what happened to me while working in Vegas. I rear ended someone who in turn hit the car in front of them. I didn't hit them at a high rate of speed. Next thing I know 3 ambulances show up and cart both people in both cars off. They were walking around until paramedics walked them back to their cars so they could be taken back out of their cars on stretchers. Boss told me he had already heard from attorneys and everyone was looking to get paid. Moral of the story , get what is owed to you.

Don’t forget to claim collateral damage too, value you lost for your car after accident.

I'll file with DMV the report; I just lost a day of work dealing with the new tires installed and looking for a mirror, picking kids up, dinner (easy one).

Staff member
Glad you are OK!

Yes, for that much damage, you have to file a report.
$3500 seems quite low.
Unfortunately you also have to tell your own insurance company.
It is usually a policy violation not to. Bad idea, but feel free to check.

Which yes, means it may raise your rates. Sorry.

Pretty sure missing work is not something you can claim.
Only actual damages and injuries.

Forget the used parts and other nonsense.
And honestly, I would recommend having your insurance company deal with them, not you.
Especially if they turn out to actually be uninsured.

Be very careful to get all the checks and estimates BEFORE fixing your car.
(Tire is no issue)

Get an estimate from a reputable dealer to fix it right.
If they give you a check for that, great.
You can pocket that and get it fixed cheaper if you want.
S

Staff member
My one experience with "suing" someone (lawyer speak for my lawyers negotiated with their insurance company) was that in addition to the car damages they ask for 3 times the medical costs, the idea was it goes to the doctor, you get 1/3 and the lawyer firm gets 1/3, this was one of those "You don't pay unless we get money" type of deals. And the real reason I just did it is because this was the 2nd accident in 2 weeks (not my fault either) and my insurance company dropped me from the policy as a result. Which in the grand scheme of things was good because Allstate while widely known is expensive as all hell

Sorry to hear about this Mario. Glad to hear you are ok.

Yep. And I can’t recall any accident repair work where they didn’t find more damage once everything was taken apart.

If you go through insurance, they will just authorize the additional work if the shop is pre-approved with them.

Staff member
I remember when I was rear ended way back.
It looked like a tiny $20 dent in the bumper. I almost said forget it and left.

Then I took the tire off the back door, and noticed the door was caved in.
When they started fixing the door, it turned out the frame on one side was bent.
And the bumper underneath turned out to have structural issues on one of the mounts.

It ended up being thousands.