As it's name implies, my old frag tank.

Nothing fancy and just reusing old gear. The smallest Tonga rock grouping from the old 87G. 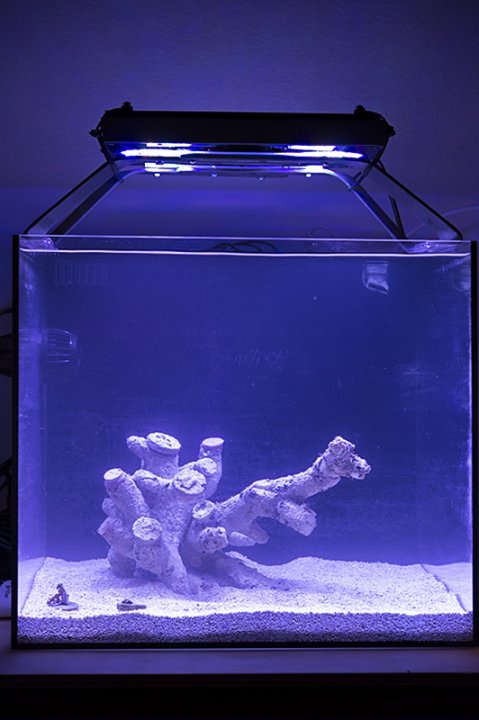 Need to pick up a skimmer for the back chamber and considering the IceCap K1 nano skimmer. They're all out of stock and won't be back in stock until the end of the month from what I've gathered. It's either gonna go into the first chamber or the second depending on how accurate their measurements are. I'll stick a cut up Marinepure block in whichever compartment isn't being used in the back.

The other option is to run the tank skimmerless and just stick with doing 5G water changes weekly/biweekly. I do tend to feed pretty heavily in the past and want to go mixed reef with sps, as in the previous tank, so not too thrilled about this. Have plenty of time to decide on this as the tank is cycling (with a couple of frags already ).

Looking forward to this, miss seeing your beautiful pictures!

I’ll believe it when I see it

Glad to see you back

Ordered the Icecap K1 nano skimmer and will be testing that out once it arrives. Also took a Marinepure 8x8x4 block (unused block that I had stashed away) and cut it down to 3x3x8 and stuck it in the first chamber.

Decided to set up the CaRx instead of doing the 2-part. Still have a couple of Kamoer pumps so felt that it would be a waste if I didn't reuse one of them. Also added some Monti caps to the tank a couple of weeks ago to see how they would fare. One of the caps was broken up into 3 smaller pieces so I just mounted them on some rubble and they've been slowly fusing back together.

After observing the Montis for a couple of weeks, I went to Neptune yesterday and picked up a few Acro testers from their $10/20 tanks. Polyps were out on them ~30 minutes after being tossed into the tank (after the Bayer dip/scrub) so we'll see how they'll do.

BOD
You’re welcome to pretty mu ca anything I have if you want anything just let me know.

Coral reefer said:
You’re welcome to pretty mu ca anything I have if you want anything just let me know.
Click to expand...

Thanks! I'll let you know if I'm in need of anything.

Ibn said:
Ordered the Icecap K1 nano skimmer and will be testing that out once it arrives.
Click to expand...

I’ve been looking at that. Curious how you like it, specifically if it’s quiet or not.

those acros look nice, Neptune has been getting some really cool acros recently!

max_nano said:
I’ve been looking at that. Curious how you like it, specifically if it’s quiet or not.

those acros look nice, Neptune has been getting some really cool acros recently!
Click to expand...

Neptune has some nice frags for sure that goes through their tanks. I've been contemplating about having the tank be fully filled with wild/maricultured frags versus named pieces. I'm familiar with many of the named sps out there and I've seen variations of them come in.

max_nano said:
I’ve been looking at that. Curious how you like it, specifically if it’s quiet or not.

I am using the IM bio skim on my nano and it’s good but is the loudest component
Click to expand...

1+ hours in diluted vinegar bath and she was good to go. 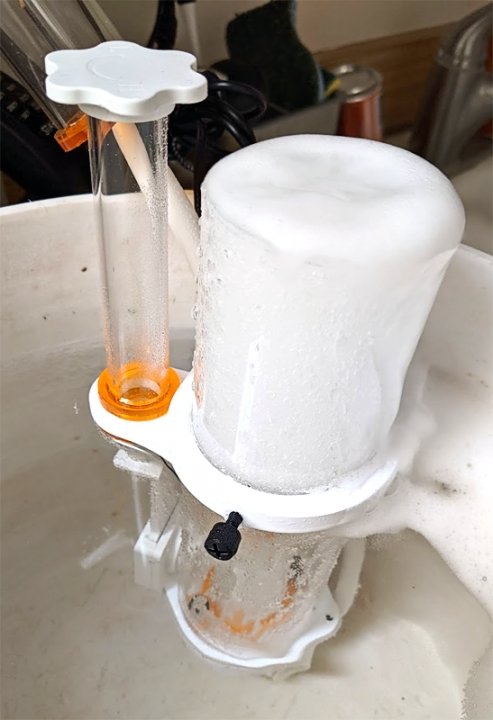 Cute little bugger. I have it set to skim dry (bubbles at the beginning of the neck), but it still pulled out some stuff, as if it were set to wet skim. After pulling it out it settled down. Bubble head seems to be stable now.

In regards to performance, we'll see how it does long term. Noise-wise, it's very quiet, other than the sound of the micobubbles being produced; you can't hear the pump at all. It's quieter than the impeller noise of my MP-10W (with QD wet side) that I hear when the pump ramps up and down on reef crest mode. Favorable initial impressions of it so far with it being in operation for ~24 hours.

Other notes:
No instructions came with the skimmer, but not hard to figure out at all if you've ever used a skimmer before.
Tiny skimmer with tiny cup. Wish there was a built in drainage tube to funnel to a drainage container. Would require a design change or uniseal on the side of the cup, since its compression fitted to the body.
Bubble head very easy to adjust.
Careful about tightening the black thumbscrew which is for the bracket. Too much tightening can definitely crack the skimmer body.

~6 days in operation. Not as dry as I'd prefer but considering its age not too shabby. 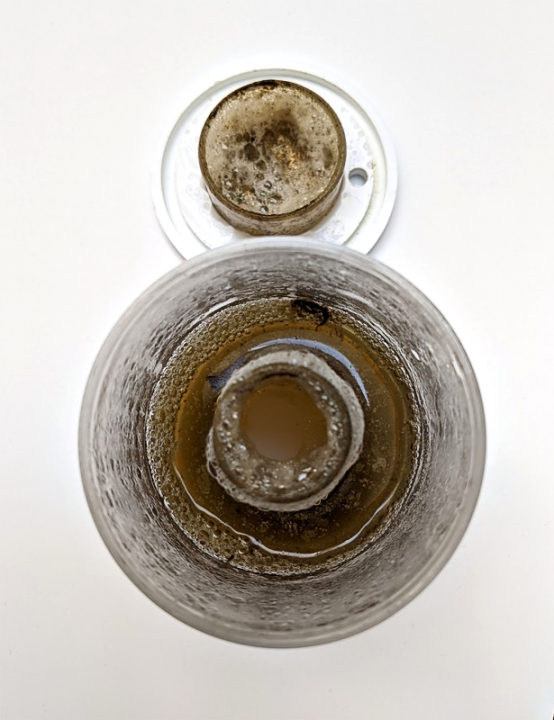 One of the first sps to go into the tank as a tester. Green cap. 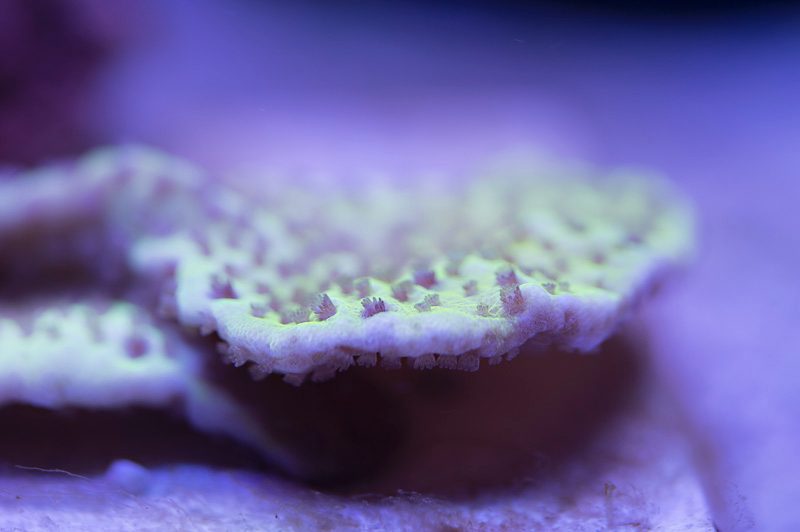 Added some more sps a week ago and they seem to be doing well, including this tenuis. 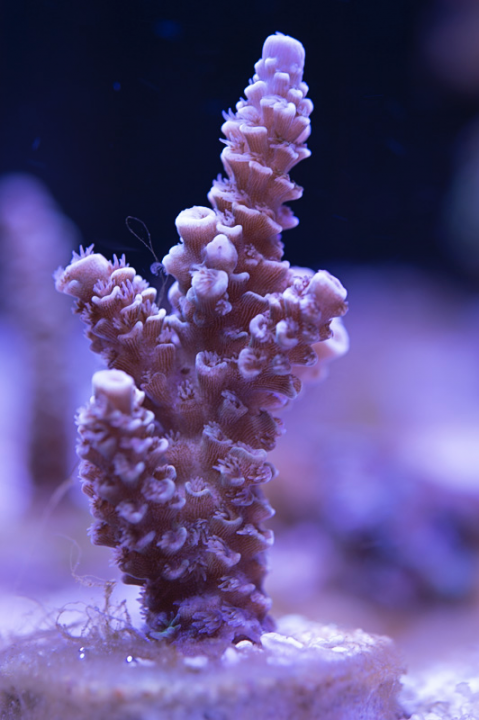 The tip has grown a bit (~.25") and it looks meh right now. Not sure how well it'll color up considering the fact that it's rather pastel in coloration with the yellow tips on the axial corallite. 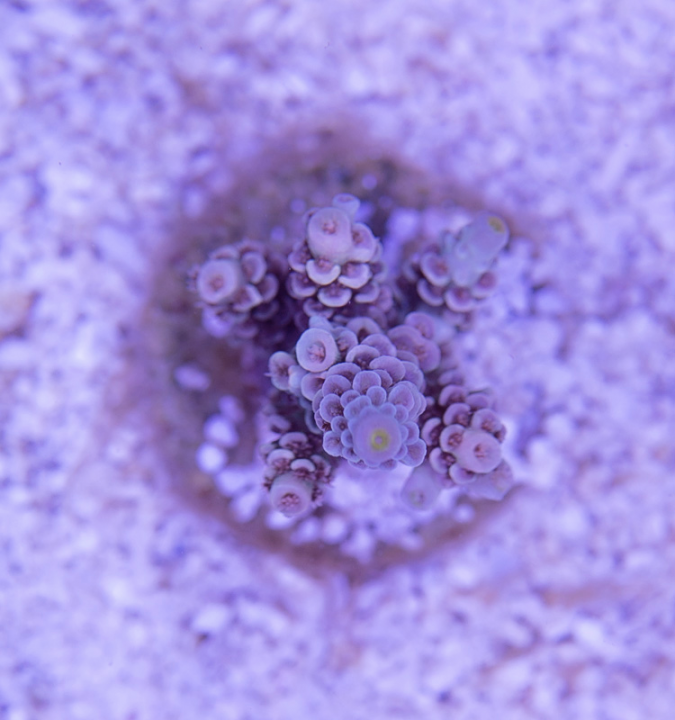 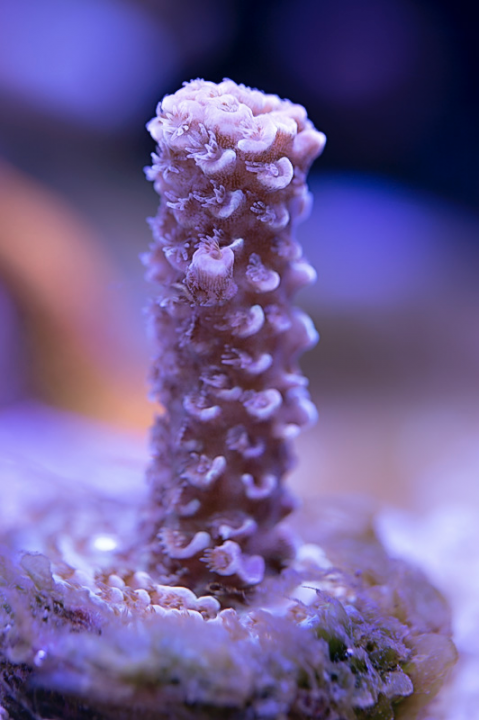 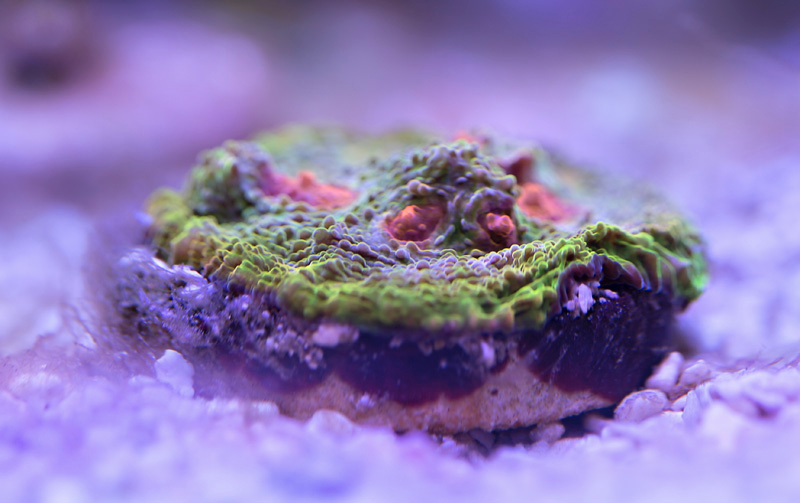 Flaming Bugatti. The edge isn't too happy at the moment since there were some hitchhiking vermetids that I clipped and nicked the edge there. 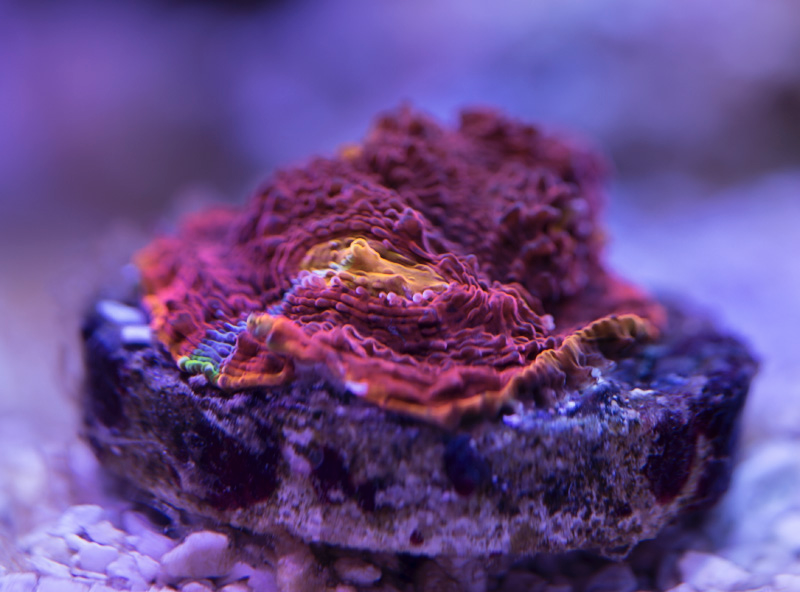 The other swimmer in the tank, Starck's damsel, my little grazer. 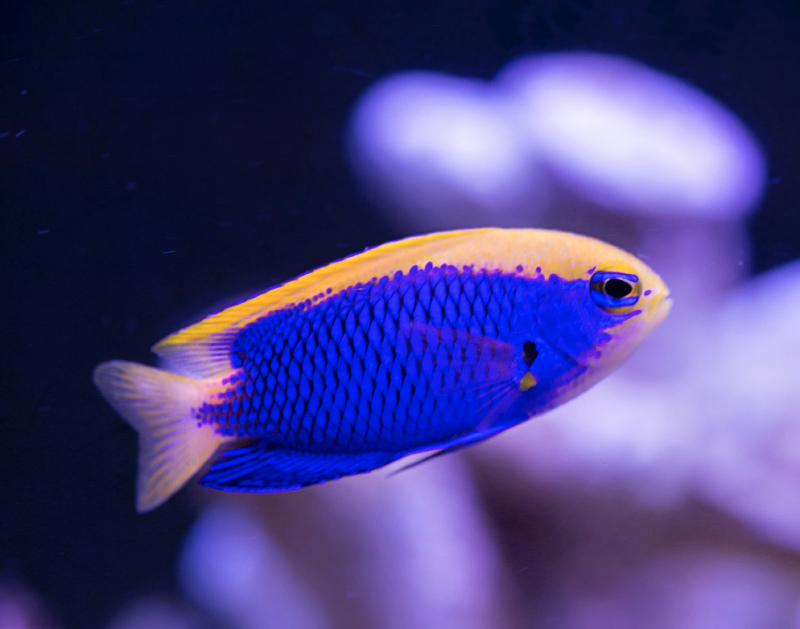 Made a trip to Neptune and brought home some more goodies.

This unassuming piece under whites vs. blues. Blue body with reddish polyps.

holy heck that looks like the rr lady in pink! how much is it at neptune?

Adit0 said:
holy heck that looks like the rr lady in pink! how much is it at neptune?
Click to expand...

Pretty nice Eric.
What I love @robert4025 Neptune, are the $10/$20 sections; there’s eye candy in there that is also in the higher priced tanks; one just has to look for them.

xcaret said:
Pretty nice Eric.
What I love @robert4025 Neptune, are the $10/$20 sections; there’s eye candy in there that is also in the higher priced tanks; one just has to look for them.
Click to expand...

Was able to pick up a couple pieces of coral rubble from an established tank. 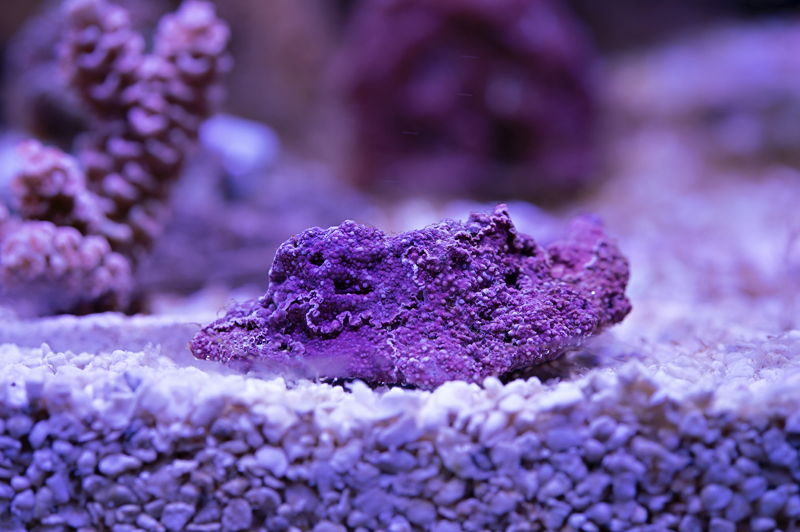 Brushed the surface of them a couple of days ago and starting to see signs of coralline on the rock today. 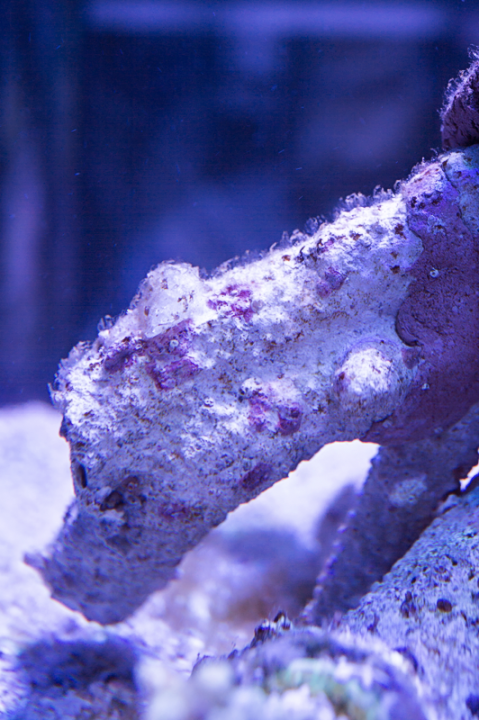 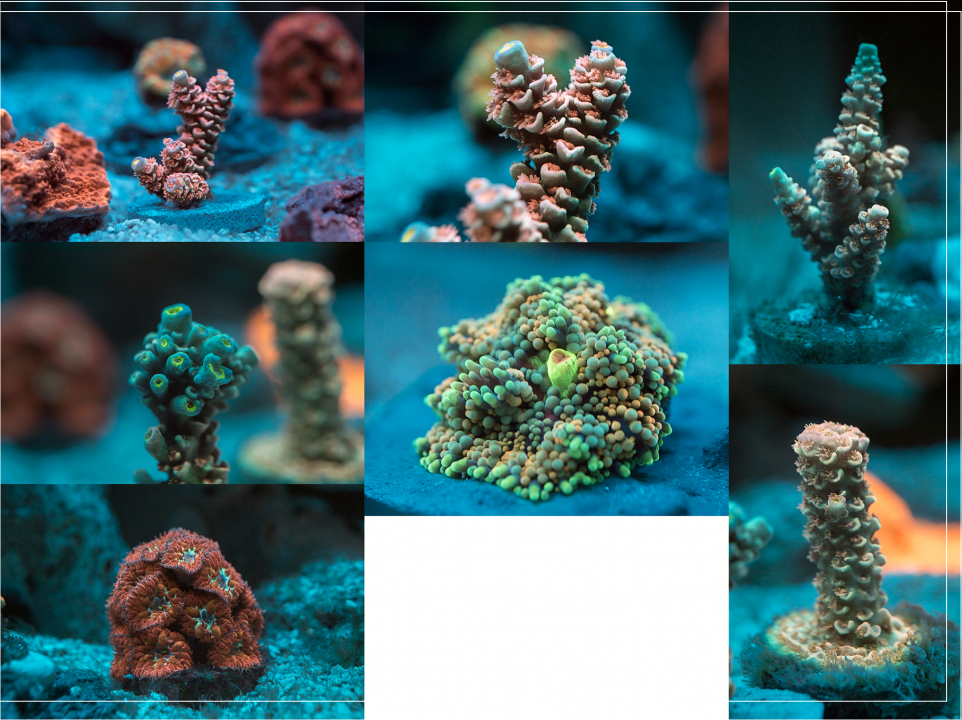 This was the 9th Acro added to the tank. As you can see it was pretty much a fresh cut with the exposed skeleton on the side. 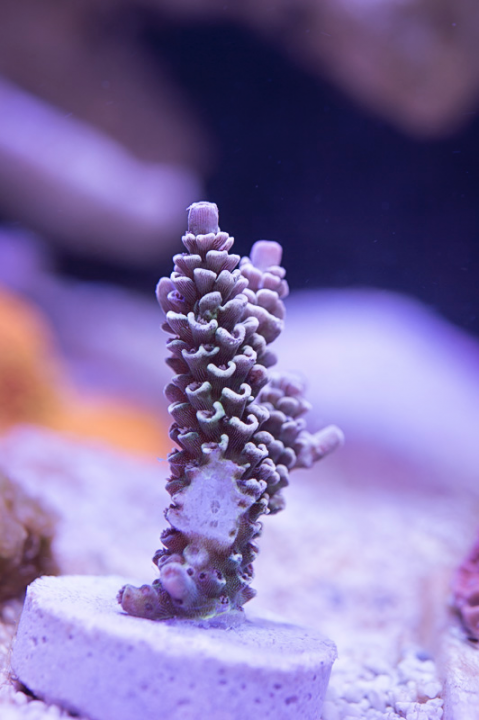 This is today, a week from adding it to the tank. 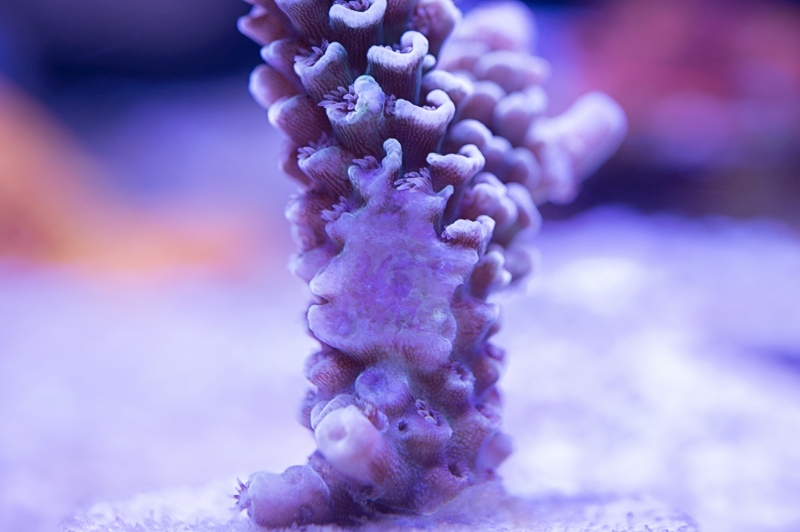 Tissue has started to regrow over the cut and the skeleton is no longer exposed. Not much happening with it otherwise, other than better polyp extension, and overall lightening of the coloration (lack of nutrients). It'll be mounted to the rock work in another week or so.

Here's another couple of sps that were mounted. Left one is part of the first batch of Acros and the one on the right is from the second batch. They sit on the sand bed for 10-14 days before they're mounted. The PAR isn't significant more on the rock versus the sand bed, so the lightening of the tissue isn't from PAR but rather low nutrients instead. Been adding both Acropower as well as phytochrome to the tank in the meantime.

Been tweaking with the solenoid, feed pump, and effluent rate to maintain the alk. Been manually testing twice daily to do so and looking forward to the Trident, which will make it easier to adjust as the corals grows in and the tank matures.
Last edited: Apr 27, 2021
You must log in or register to reply here.
Share:
Facebook Twitter Reddit Pinterest Tumblr WhatsApp Email Share Link
Top