Back in action & upgraded - 60g journal

It's been a minute (almost 10yrs, actually). Finally back in the game, and I have corals to give away. That said, some may be curious of my tank conditions. Here goes:

Just a little history up until now:

I just realized my original tank thread doesn't link to the pics anymore. Here was my pride & joy when I first joined BAR back in 2009-ish:

This was actually my 3rd aquarium. In hindsight, I caught lightning in a bottle in a 29g JBJ nano, photosynthesis powered by a single 150w Phoenix HQI -- with minimal equipment & little to no testing. So what happened: I went against the common saying, "If it ain't broke, then don't fix it." I got so awestruck by the colors produced by LED and swapped my metal halide for a Kessil A150 (this was back in 2011 or so). Colors were, indeed, spectacular, but there was shading galore. Anywhere there was shading, the corals would STN. Eventually, all my SPS's died. Heartbroken, I limped into a Radion upgrade with minimal success keeping montis & other softies -- but still no luck with acros. Eventually, my family & I moved to Pacifica, and I decided to not resume my much beloved hobby (mostly due to new-home-syndrome, aka: no money for coral).

Fast forward to 2017, and inspired by a close cousin's thriving reef tank lit by Kessils, my lovely wife buys me a 60g rimless for Christmas (thanks Neptune for the plug [not sure if they're a sponsor here anymore, tho']). Determined to recover past glory, I break out my old Radion -- hell-bent to get this thing right. To my surprise, and after nearly half a decade in hiatus, there are $1000 "designer" acros named "flaming hell raven" and the sort -- and even more inexplicable are $1000 mushrooms (yes, similar to the ones I used to try and scrape off or drown in fresh water because they had grown into pests). More importantly, the dominant light source for growing (yes, growing) corals has become LED. Stopping by Vivid Aquariums in SoCal, and seeing the type of acros they grow with just Radions, I'm more determined than ever that I, myself, can grow quality acros as I once did. Hell, if Vivid & I basically have the same equipment for raising corals, who's not to say I can't do the same.

So, now, as I begin my journey once again to relive past glory (and I may be dating myself here, but just like how Al Bundy threw 4 touchdown passes in a single game), how has my reef-keeping habits changed? In short, more effort. More effort in testing, and making sure my water parameters are consistent. Because whether it's due to the quality of lighting from LED, or the over-efficiency of macroalgae refugiums, or maybe getting un-established lineages of acros vs firmly established ones (i.e., Jawdropper vs. Pink Lemonade), one thing is for sure: the corals I'm dealing with now are more susceptible to fluctuations in water parameters than I was previously used to.

Ultimately, after all these years, one thing I can recommend is to use the features in BAR -- specifically DBTC and frag swaps. First & foremost, you are more confident in the corals -- in that they are well established, aquacultured in a home aquarium, well-suited for the ups-and-downs of the typical reef keeper; in my mind, the dirtier the tank, the better -- but don't forget your prophylactics (i.e., dips). Who doesn't like free, well-established corals, right?

Thanks, love your screen name.
I

Otakuthugster said:
Thanks, love your screen name.
Click to expand...

And regarding your comments on using the resources here (though I know they're not directed at me specifically): I fully intend to, and I'm looking forward to contributing to DBTC (and hopefully taking part in my first frag swap) later this year.

Out of curiosity, what's ICP/that parameter tracking program you have in your first post?

Staff member
Let me know if you want any corals I have in sf. I remember the bubblegum millie you used to have. One of the corals I most regret killing.

And regarding your comments on using the resources here (though I know they're not directed at me specifically): I fully intend to, and I'm looking forward to contributing to DBTC (and hopefully taking part in my first frag swap) later this year.

Out of curiosity, what's ICP/that parameter tracking program you have in your first post?
Click to expand...

Wonderful, looking forward to seeing you at the swap.

Coral reefer said:
Let me know if you want any corals I have in sf. I remember the bubblegum millie you used to have. One of the corals I most regret killing.
Click to expand...

Thanks for the offer. I'll definitely let you know.

IOnceWasLegend said:
Out of curiosity, what's ICP/that parameter tracking program you have in your first post?
Click to expand...

The ICP results in the post are from ATI. I swap between ATI & Triton. ATI when I want my RODI tested (it comes free with with the in-tank analysis), and Triton when I want quick turnaround (no RODI testing, but they have a SoCal testing facility, so I get results within a week).

Last month, I discovered copper in my ICP analysis from Triton. I wanted to rule out RODI as the source, so for this month, I went with ATI.

Wow man you really have some nice frags in the tank!

Found a likely source for the trace copper the ICP test has been picking up: 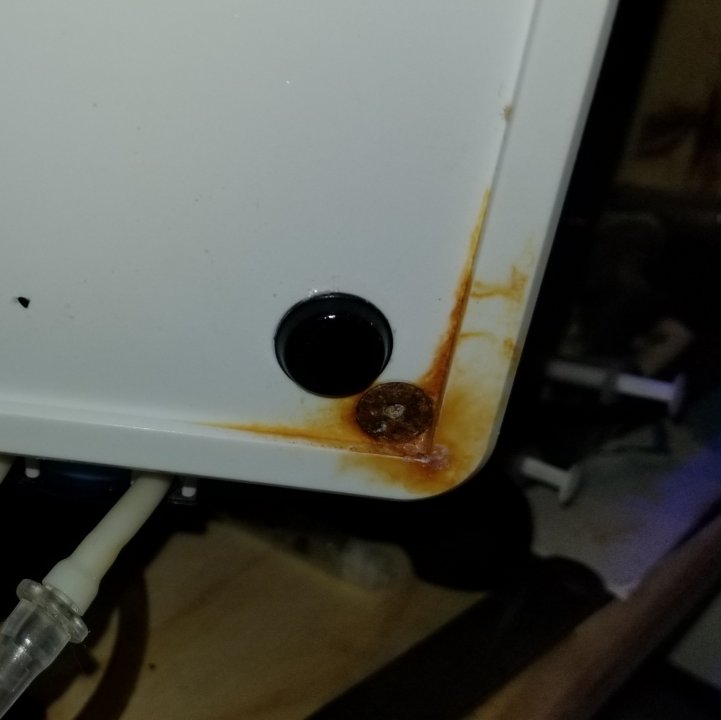 This is the bottom of my doser that was sitting on top of the sump.

Decided to re-work all the tubing, and place it in the floating cabinet, adjacent to the tank. Got wifey's blessing to drill into it, so I went ahead and made a 1.5" hole to route all the tubing and wires. Here's the end result: 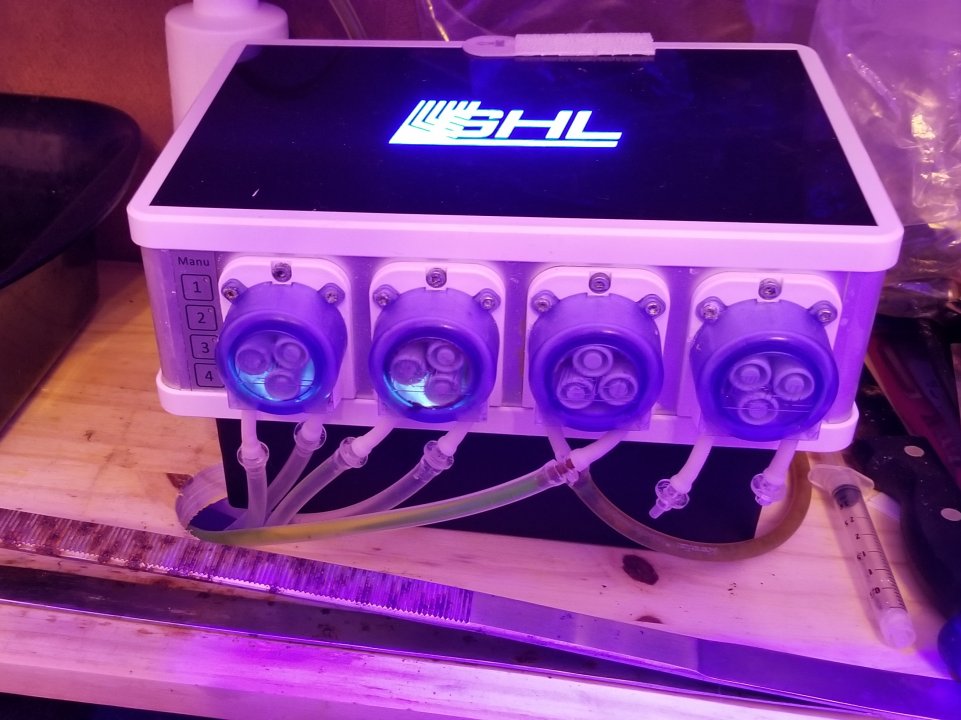 Hopefully, this solves the issue.

On a dosing side note, I stopped feeding Reef Roids/Chili due to hair algae blooms. Instead, I just upped my Reef Energy dosing to 20+ mL a day. I realized this would get rather expensive throughout the year, but I was able to find a good deal on LiveAquaria for a 5L bottle of A/B+.

Lastly, I went ahead, and started adding KZ Coral System, Bottle1 to my dosing regimen. I figure I'd give it a try since it has all the trace elements that I'm lacking in the ppb range: Nickel, Manganese, Fluorine, Sodium, Rubidium, Zinc, Vanadium. Currently, manually dosing a bit less than recommended, at 10mL per week. Submitted for ICP after a week of dosing to gauge uptake (if any), and will key in on an optimal dosing regimen when the results come in. 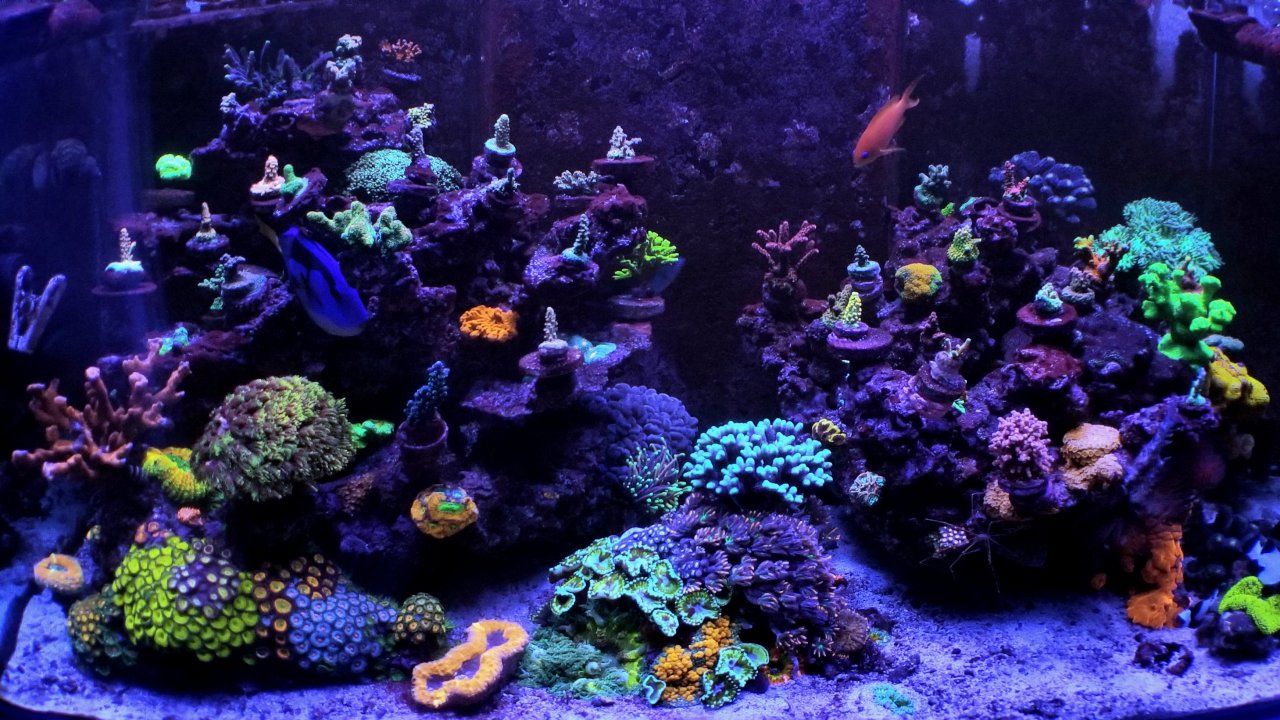 12/11/2020 Update:
Finally invested in a refractometer (bye-bye swing hydrometer) and things have been on the up-and-up. Slowly raising alk to 8.8dKH (from 7.5dKH), and slowly raising Nitrates to 5-10ppm with NeoNitro (previously <1ppm). Just got back some ICP results a week ago after a 2 month layoff, and found Ca, Mg, I, K, and Sr were on the low side. Managed to set-up my own reef calculator, and just finished dosing to get those elements in a better range.

Lastly, finally got my Radions up to 85% intensity -- had the hardest time maintaining above 60% when the salinity was out of whack. Tenius row is getting a nice 400-450par of lighting, with the remaining acros mostly getting 300-400par. Here's the new PAR map: 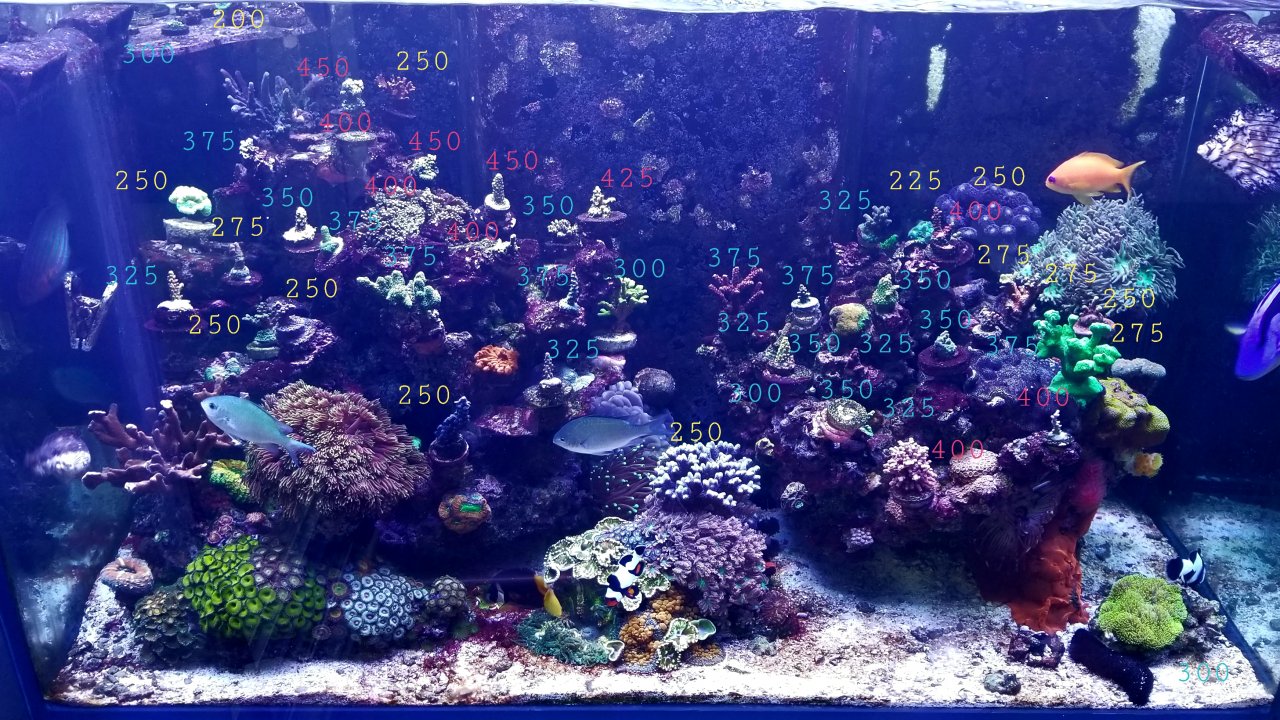 At this point, I'd feel comfortable raising the Radions to 100% intensity, but will likely only raise it 90%. I'll see how things go after I get the alk keyed-in.

Tank looks good what acros do you have

Sent from my SM-N960U using Tapatalk

All different kinds -- over 40 last I checked, with a few duplicates sold under different names. I tend to keep the classics like the Slimer, PC Rainbow, and Hawkins on the right rock formation -- along with the more established types like the Pink Floyd & Fox Flame. And the tenius usually go on the top, left where the lights are brightest.

Yup-yup...enough to make a huge dent in the electricity bill

Made the switch to all B+ T5's on the hybrid and made some tweaks to the Radion AB+ template to compensate for the windex look: 100% Warm White & Greens and 32% Whites & Reds. Closest I'm gonna get to the Kessil shimmer & color...so far so good.

Also, made the switch to HPD (American Reef) as a longterm feeder, adding Reef Chile & nori strips to the mix. Finally, got the nitrates up to 15-20ppm without the need to dose additional nitrates or amino acids (bye-bye expensive-ass Reef Energy AB+). Phosphates are creeping up past 0.5ppm, but I'm dosing lanthium chloride to mitigate the creep.

Awesome set up/corals. Thanks for sharing!