Taking pictures to sell some stuff.

A little off topic.

I realized I didn't have a square jig anymore for welding square tubing. Spent a few minutes designing something that will mark 45° for a cut and hold two pieces square while I tack it together.

Utter Chaos are becoming an invasive species (they migrated for a few different points in he tank and are growing like weeds).

Benefit is I can grab a rock from one area and replace it with an empty one every few months. 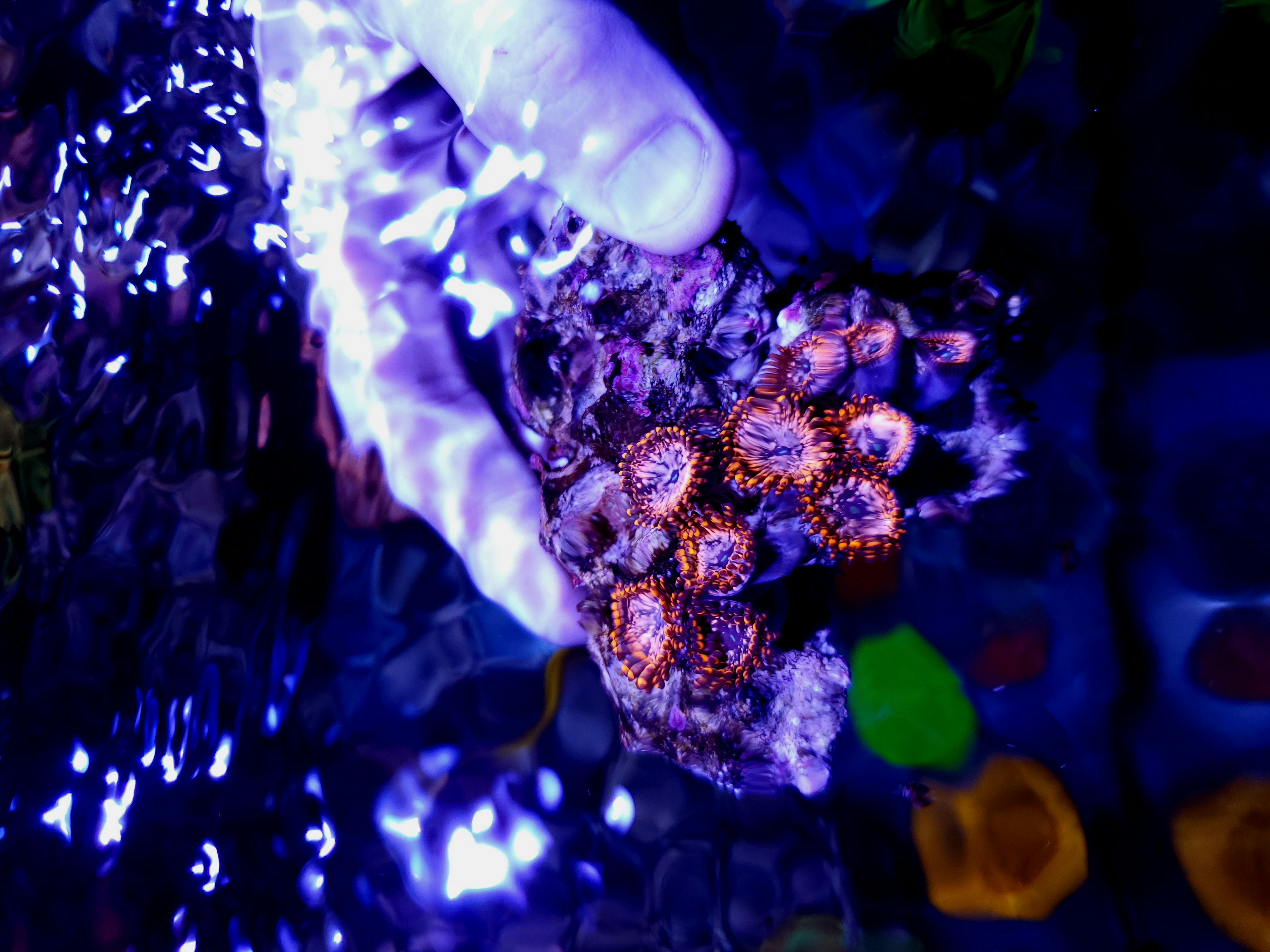 That may be the most profitable “weed” I’ve seen.

Yup. Original frag got pushed into a cave and stretched. Three polyps detached. I now have 3 colonies, totalling around 50 polyps, in different places.

ashburn2k said:
What id like to know how much it’s going to cost you monthly running the co2 scrubber

Follow up on this. The 5gal bucket of soda lime cost about $100 and lasted 18 months.

Wlachnit said:
Wow...very intense colors! What is it called?
Click to expand...

Follow up. This is what it looks like now. No idea what it's called but it has fuels a desire to have more favias. 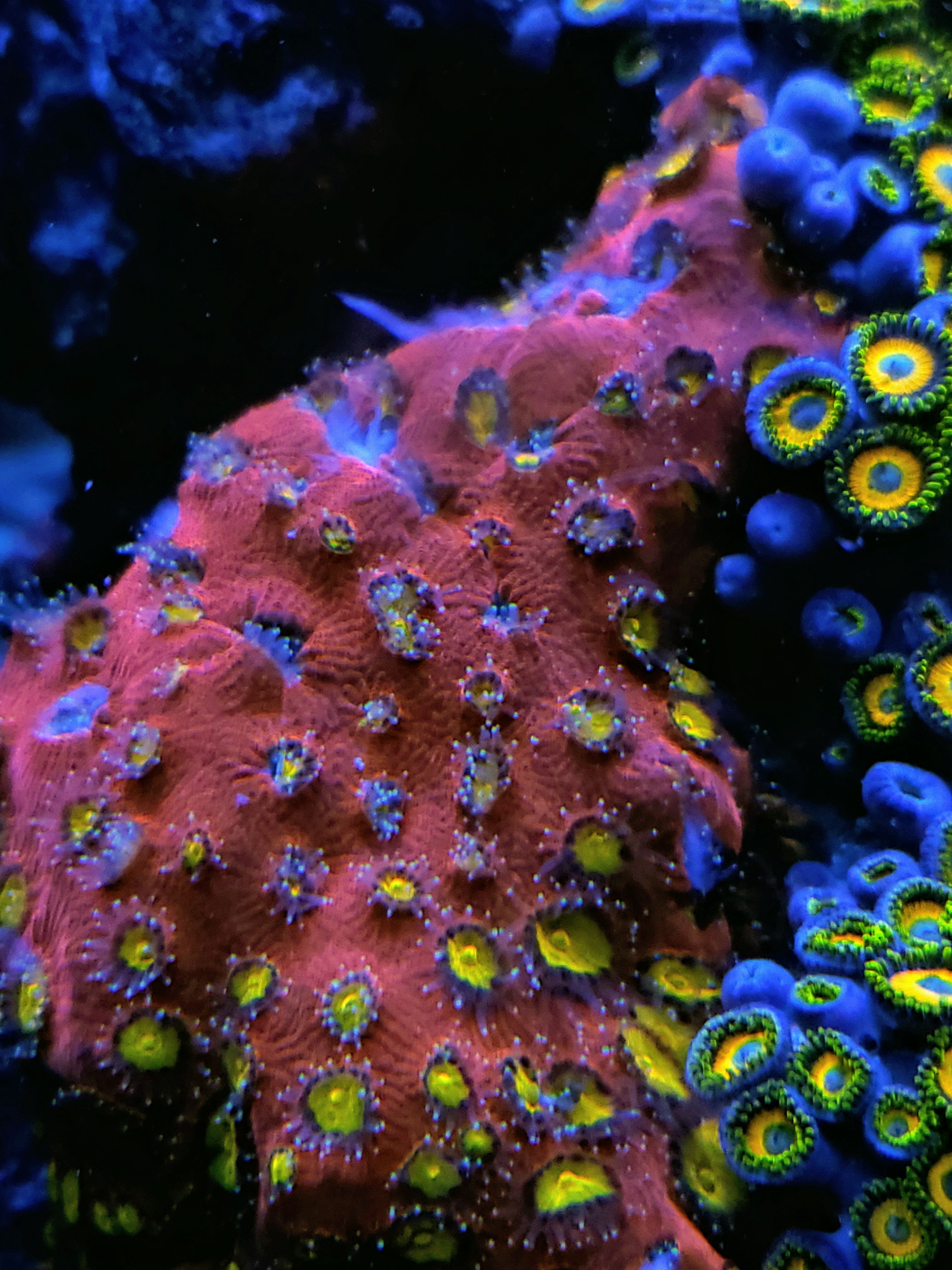 Got the tank move planned out. I'm about halfway done with the steel stands for the the 100g and 125g tanks that will be in the garage. I really want to get some more steel and make a 10" deep shelf in front of the tank for testing but I broke the welder yesterday so my budget is less than I wanted. I still need to build the false wall in the garage to isolate the tanks and my desk from the 3d printers and other crap I have in the garage (that is way too damn small for this). Stands are designed so each tank can be parted out when I move onto something else, they are pretty standard design.

Going to fill the garage tanks 75% with fresh mix saltwater and top off with water pulled from my current tank during a water change. I have been stocking up on the brightwell aquatics filter blocks. They have been "seeding" in my sump for a few weeks. Going to move them over, two in each garage tank with a power head, heater and some of the rock from my refugium.

The two garage tanks are going to hold my fish and corals while I take my time breaking down the display tank in the house. I'm putting the fish in the 125 with some stuff to hide in and rock that doesn't have corals attached. The corals are going into the 100g tank. As soon as I get the sump disconnected from the display tank, it's going under the 100g and both garage tanks will share the sump. Once life support is done, I can take my time on the house tank breakdown and move. There are some things I wish I had done differently when I set the tank up and now is my chance to correct them. All new bulkheads, coat the back glass black, sandblast and repaint the stand.

The frag tank is going to become a standalone system for a while. The refugium underneath should be sufficient nutrient export for 4 fish for a couple weeks.

Once the display in moved, I'll run the plumbing through the wall into the garage and tie the systems together.

My sump is going to be inadequate pretty soon but I really only need it to hold the skimmer (rated for 400g) and my heaters. I would like to run everything off a manifold but I doubt my deepwater 12k pump can handle the head pressure from that many plumbing pieces. Plan b is an external pump and plan c is to run the display on the deepwater and the other two on a separate pump (I'm currently feeding my frag tank this way so it's an easy switch).

I have my eye on an external skimmer I really want but it's not in the budget and I'm not sure I can convince my buddy to sell it (been in storage for years).

I 3d printed a bunch of power supply wall mounts to help clean up the wires I have everywhere. The apex equipment, pump controllers, energy bars, etc will be mounted to the wall in the garage, basically behind the display tank. My water change station is there currently but it's being moved.

The 100g tank will become my display refugium. Going to put some inverts in there I like buy aren't reef safe. My coral beauty angel that still lives in my 30g fuge will get a bigger house. BTW, I don't feed that fish. She is fat from eating pods and algae. There are some clove polyps that have survived living in purple light so they will probably explode in growth. Mangroves will also be in this tank, not sure how I want to organize that yet. It will be lit by a 5 foot long, 4 bulb, t8 shop light I have had sitting in a corner for a while. I don't want to sit at my desk bathed in red light while Im working so if the shop light isn't enough. I will have to figure something out. Solar tubes are an option.

I'm not going to use the frag tank to grow coral anymore. Not many reefers to sell to in this area.
Option 1 is to leave it where it is and just put some rock and sand in it for the little bristle tooth tang, six line wrasse and two clowns with a bunch of anemones.
Option 2 is to keep the equipment and give away the tank, stand and refugium. I put time and effort into making this a running system but I got the tank and stand for free and I feel that I should pay that forward. I would use the equipment on the 125g
Option 3 is to sell the lights, pumps and apex classic (10+ years old, just monitors ambient air temp, frag ph and controls the leds) for $200 and include the tank and stand.

I don't have a solid plan for the 125 yet. It's basically there to increase system volume and hold some rock. If I keep the equipment from the frag tank than I can put coral in the 125. Worst frag tank ever. I have 3 of the DIY rapid led fixtures that are 75w ea. Should be enough to grow anything, wost case scenario is I have to put them close together and only use half the tank. Two ow-10, an rw-4 and a IceCap 1k gyre should be enough to start with. Tank is only 18 front to back. This would be a great place to grow out stuff for DBTC or Reefers Code programs or light comparison tests.

Things are looking promising, especially with how fast things in the display have been growing lately. There are still a few things up in the air before I can start moving fish and corals. I need to come up with a few plans for managing heat in the summer. Half of the garage is well insulated and I'm building a false wall to close that half off. My landlord is really supportive of keeping these tanks happy and hasn't rejected anything I've asked to change yet. I have an exhaust fan setup for dealing with humidity but I haven't figured out how to control it yet. Probably just have it turn on anytime the cooling fans on the tanks turn on and turn on for a few minutes every hour. Not sure yet. The 170g cube will still be in the living room so it will function as a heat sync. If that doesn't work, I can leave the garage door open. Not factoring in any additional AC use, my monthly electricity should rise from ~$60/mo to $80 - $90. So... Two days of work for one 3d printer.

Kalkwasser reactor with magnetic stirrer on a dosing pump is still great. Calcium reactor is the only reason I still have a tank. It's my new favorite piece of equipment. These, as well as everything else, will be in the garage. The display tank should be much quiter than it is now.

If you see anything I have overlooked or is a bad plan. Let me know. 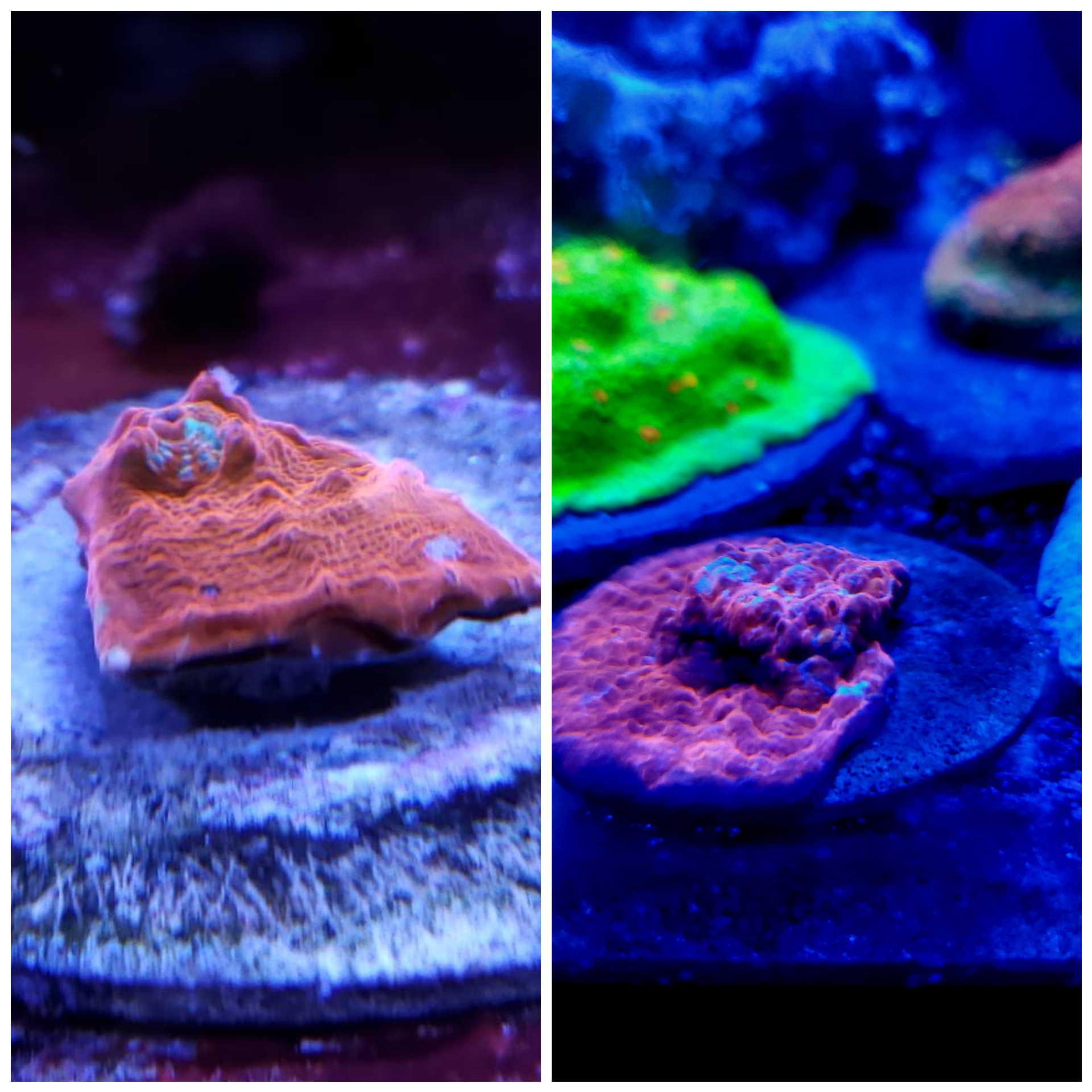 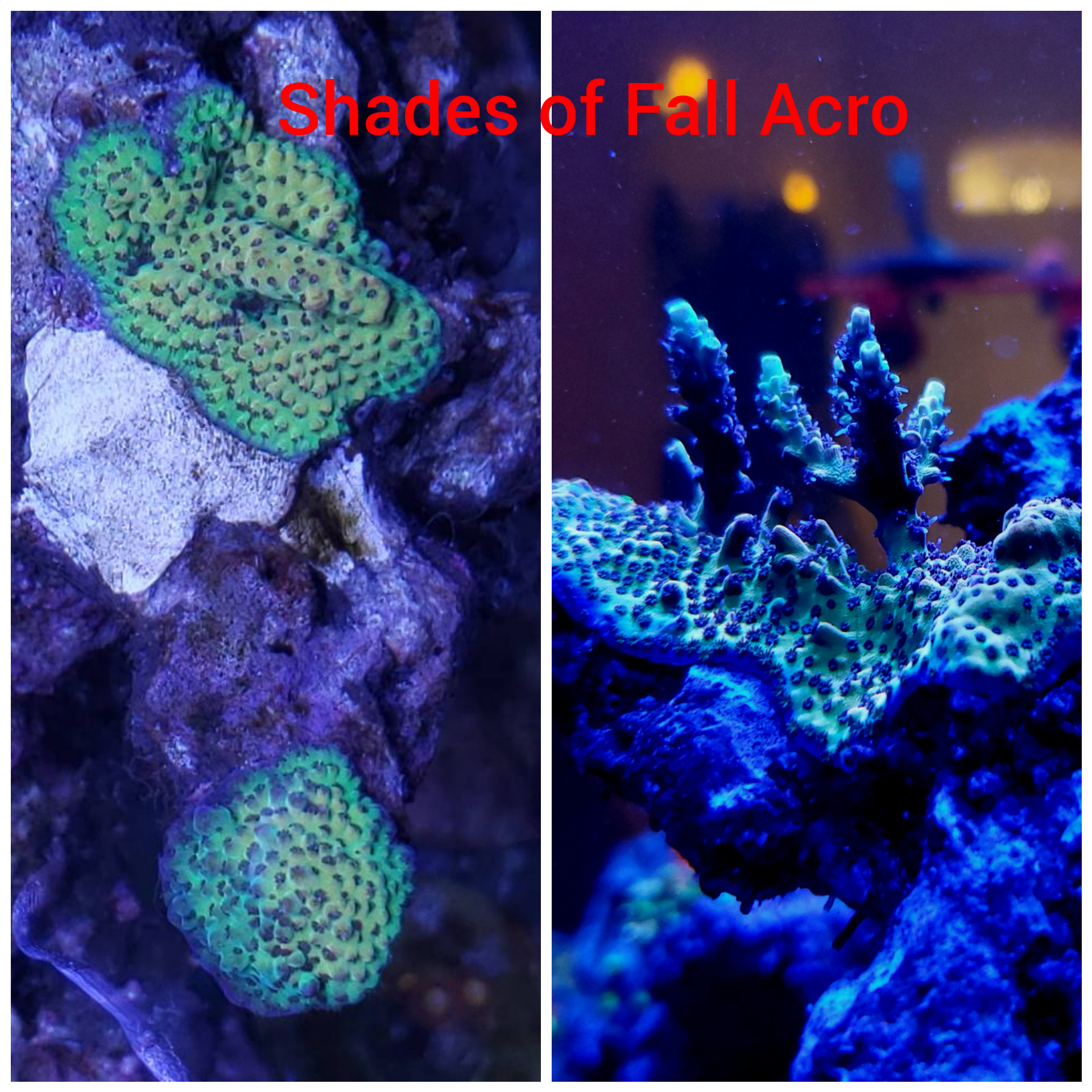 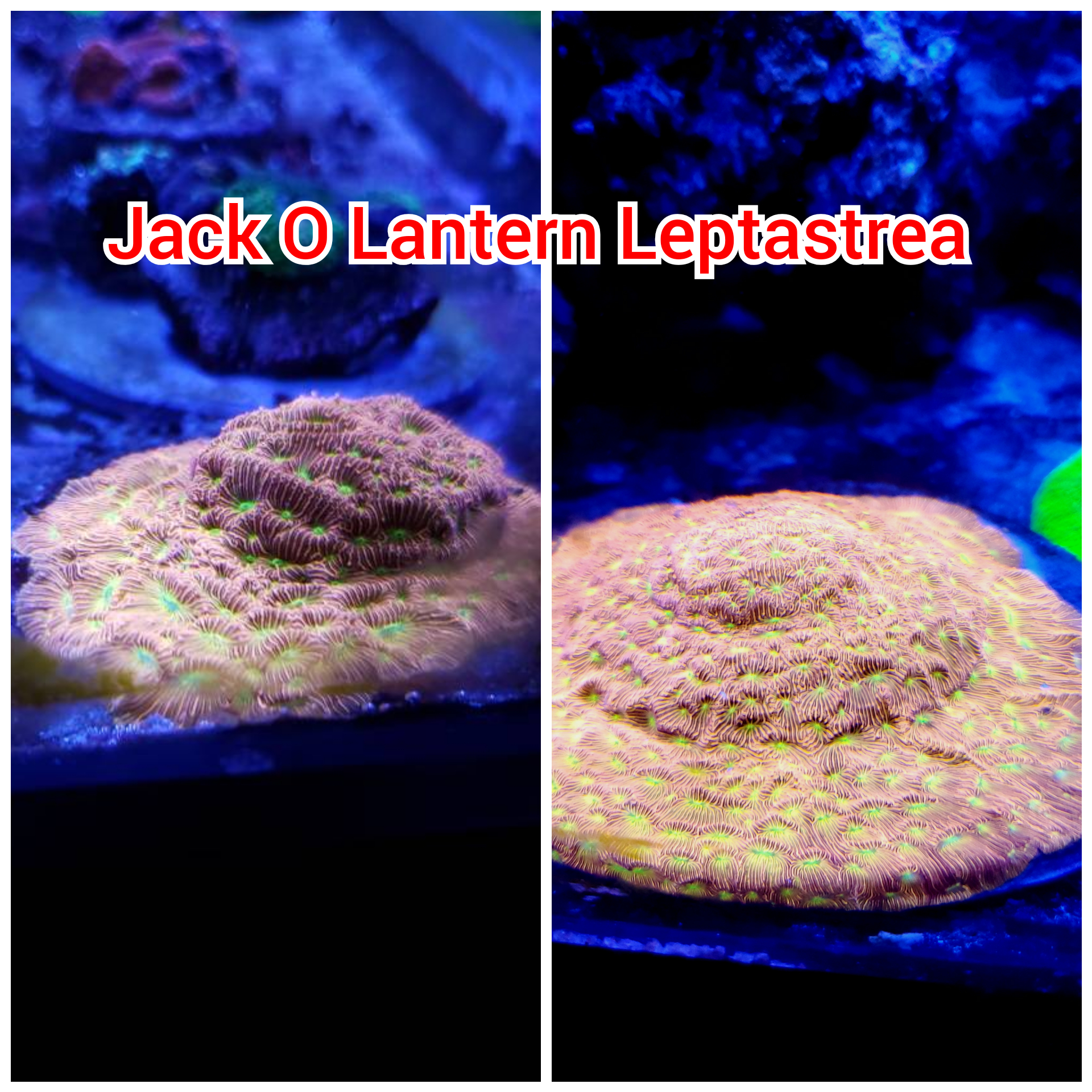 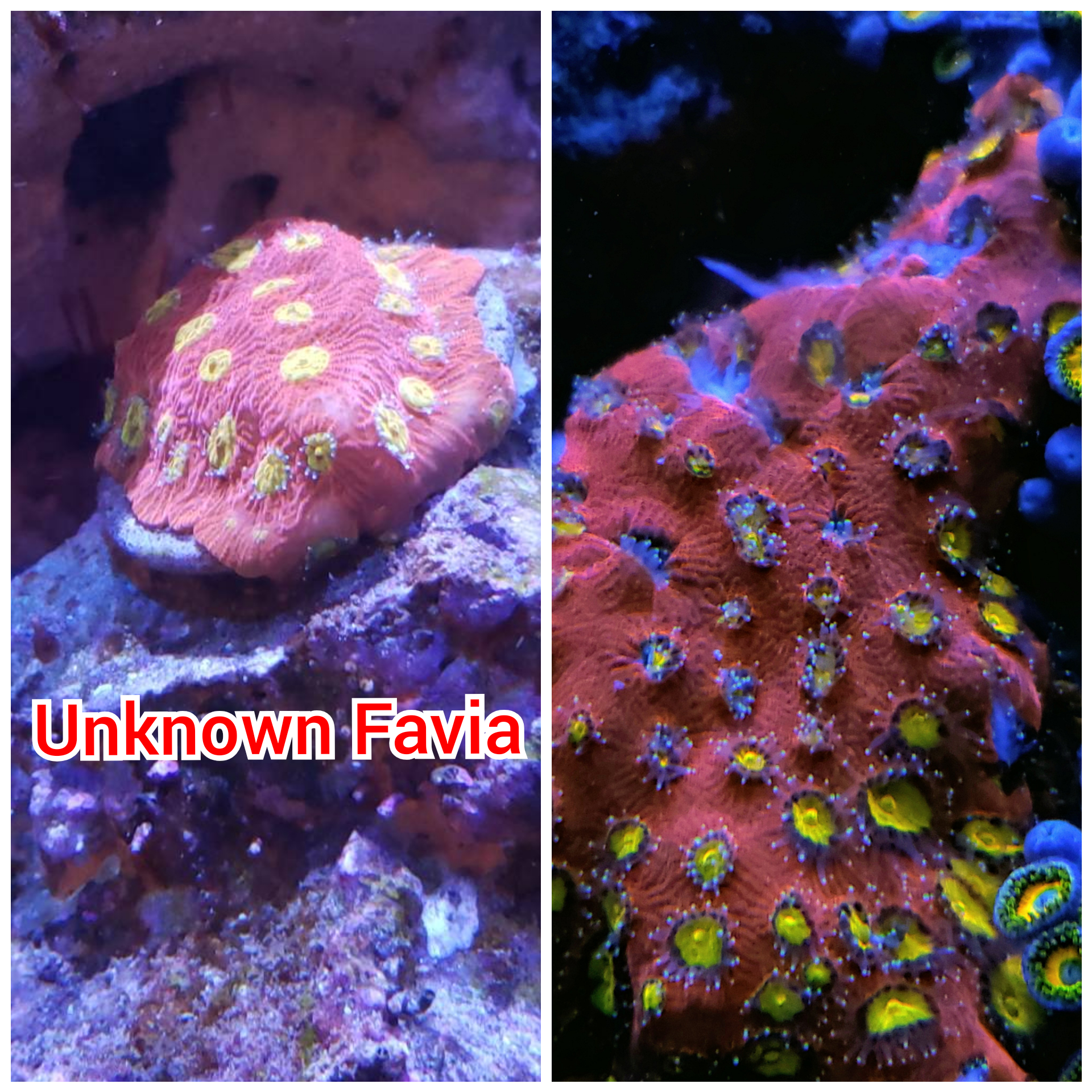 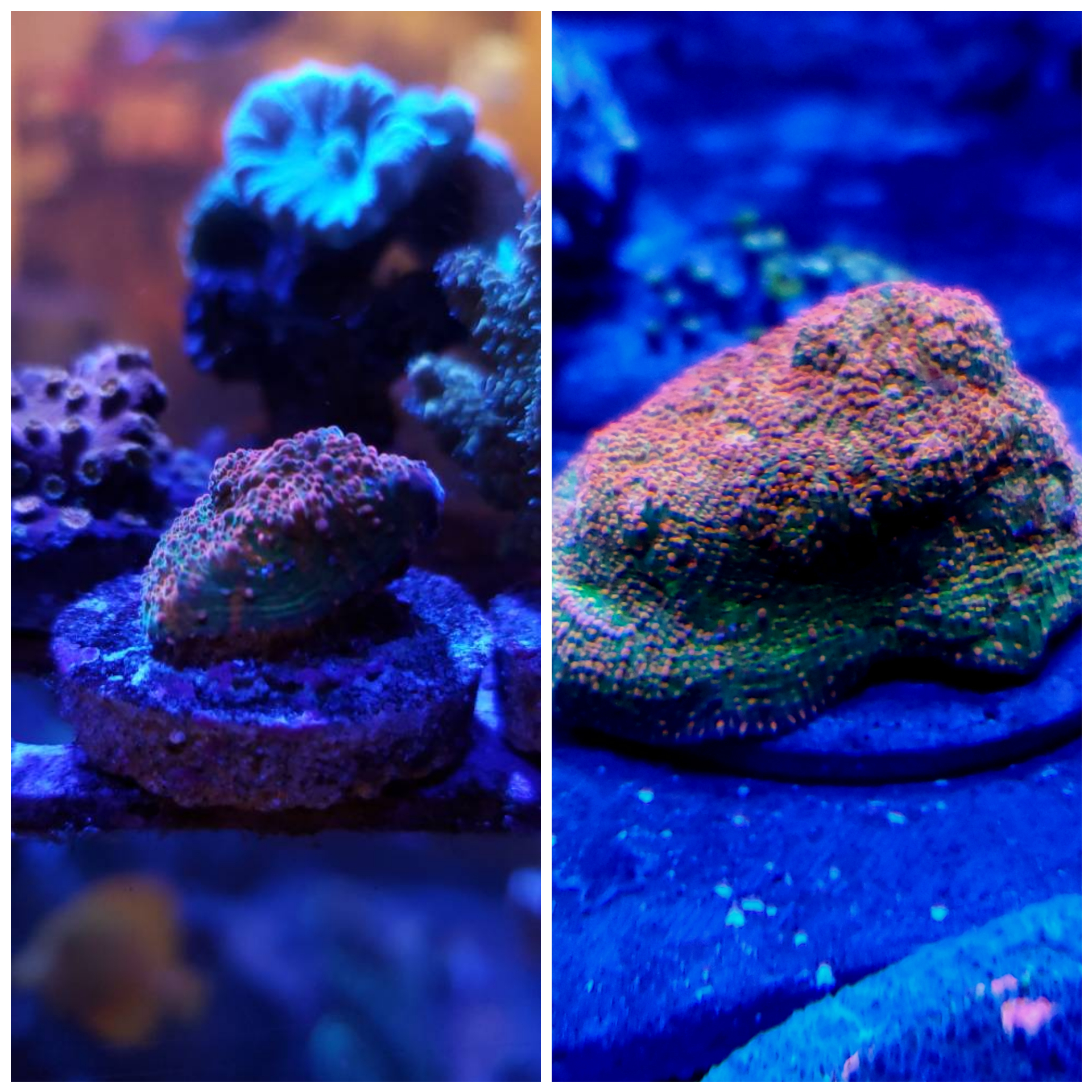 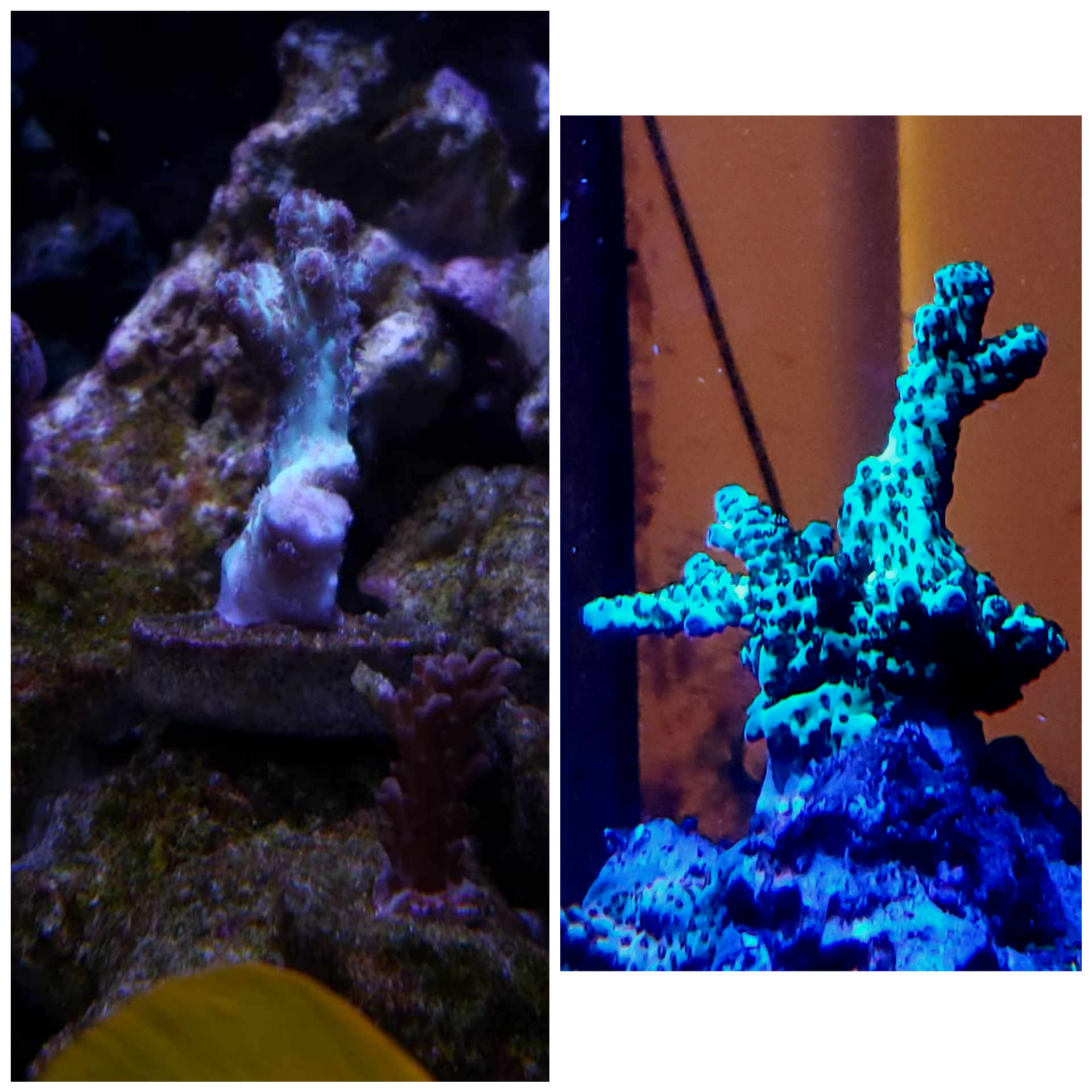 My buddy has some jelly bean. It's green mouth with yellow rim then red. I don't have any green. 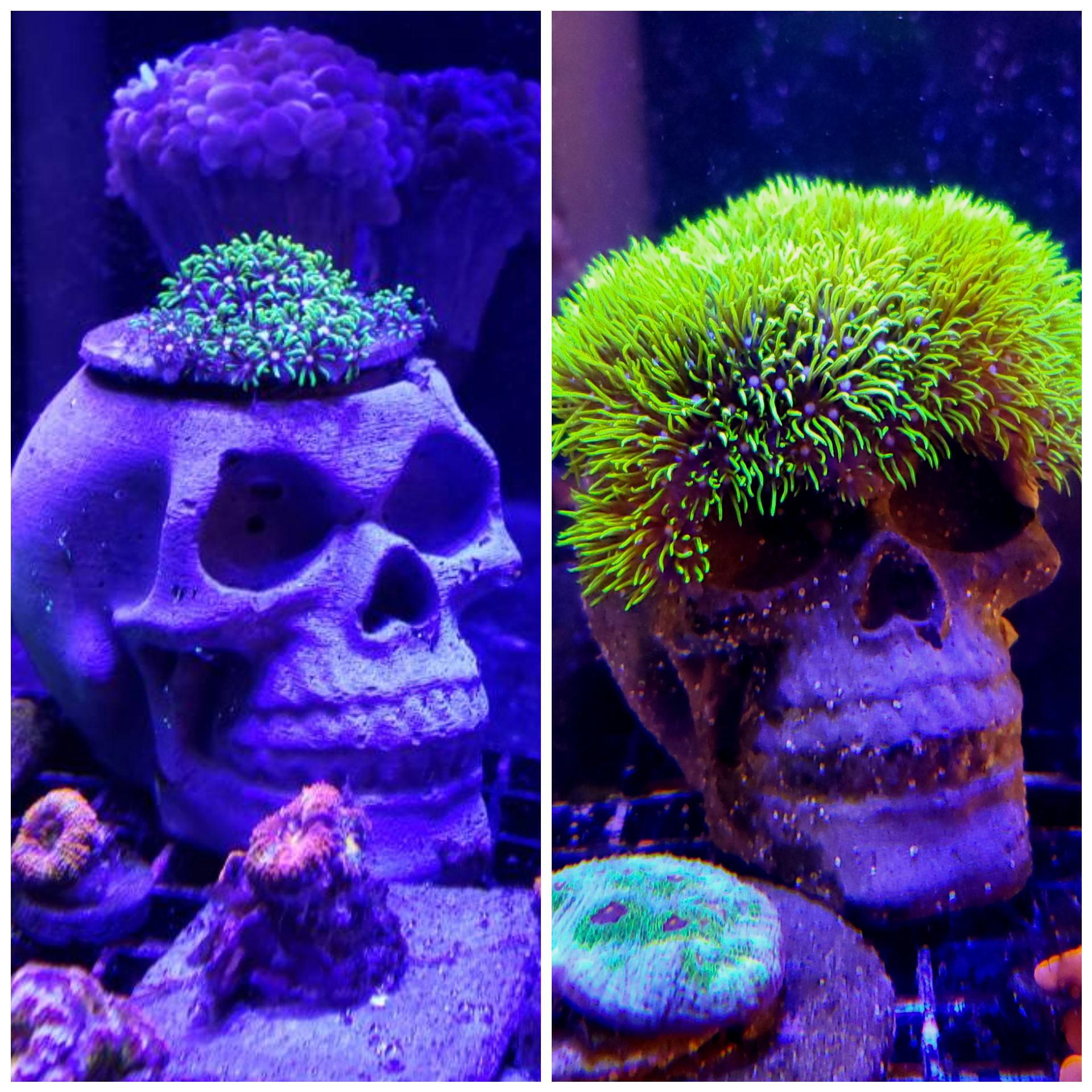 This thing is going to start growing on glass soon. 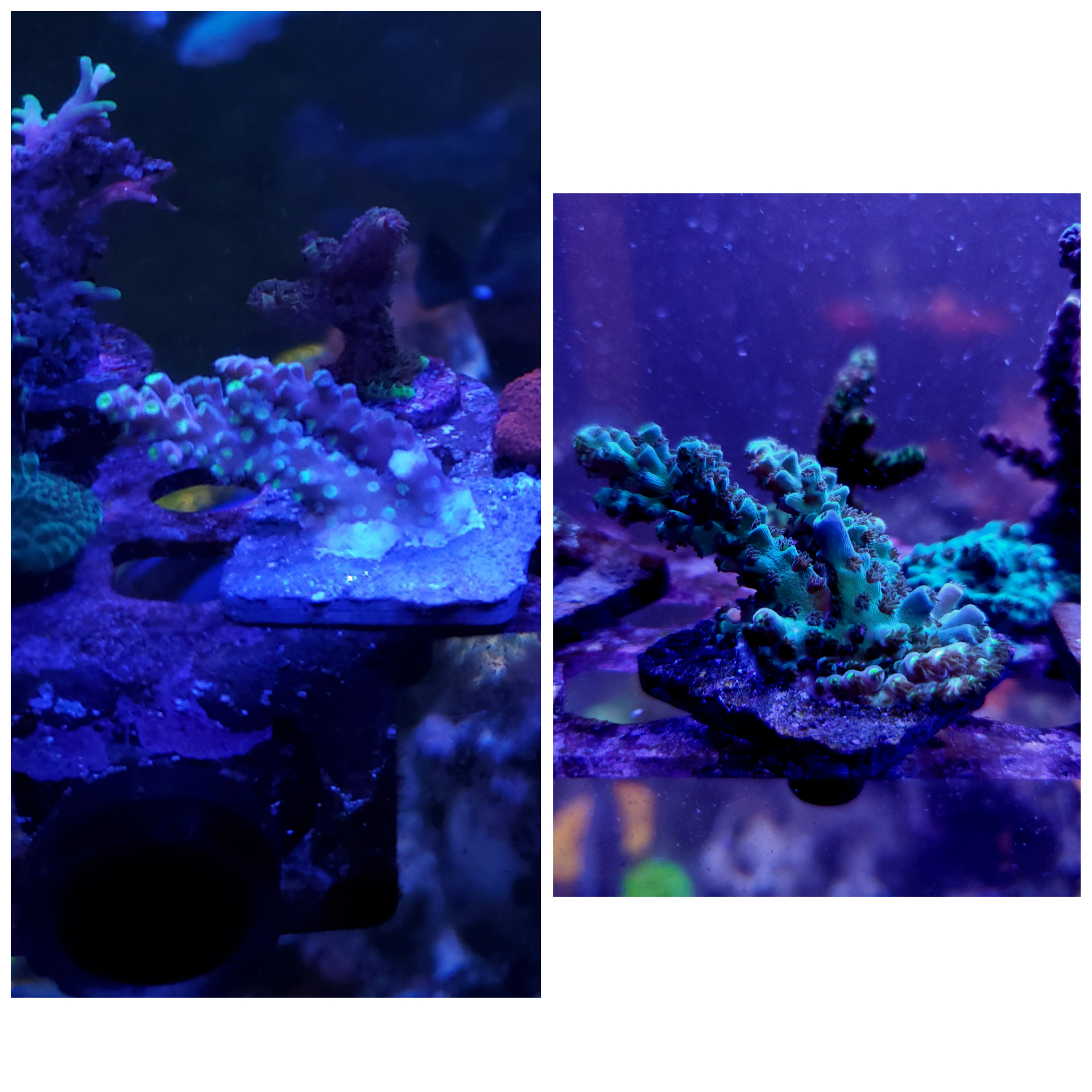 Staff member
I’ve never noticed any green on mine jelly bean. Not an expert tho.

Getting some good growth

I've been trying so damn hard to keep this thing running with everything going wrong in life.

Car broke down last night and it's $2k to fix.
I am out. I just can't justify keeping it anymore.

grizfyrfyter said:
I've been trying so damn hard to keep this thing running with everything going wrong in life.

Car broke down last night and it's $2k to fix.
I am out. I just can't justify keeping it anymore.

I didn't shut down the tank yesterday, it's still running but empty if any livestock.

Mostly to prove a point to my wife, we had too many fish. No Kalkwasser dosing, no co2 scrubber, no air from outside.... Ph is 8.35 and climbed to that point overnight, when the ph normally dropped.

I should tear it down today and start cleaning and packing equipment. The more I think about it, the more depressing it gets.

Having people lowball me or bug me for individual pieces of equipment even after being told I'm not parting it out isn't helping. Especially when I realized that this system was the product of every gift from friends and family for the last 3 years. Every gift I got was tank related.