BARcard
First I'll start off saying I honestly thought I would not being talking about another reef tank. At one time ( not that long ago ) I had just about 900 gallons of water running in my garage with 3 big reef tanks. 2 over 200 gallons and the other was a 180. Sold everything off and thought that was the end of my reefing days. Lately I have mentioned that I did miss it and would like to get back in. FishDoc's ears must have been ringing cause he told me of a screaming deal that was impossible to say no to. So I cleared the space needed and here I am. Full system with everything including corals and fish. The hard part was getting it here to my house in Hayward from Pacifica. Without the help of Mike ( coral reefer ) and Josh ( I was once legend ) I could not have done it. It was moved up a long steep set of stairs and then put back together and running the same day. Everything survived. Not enough thank you's could say enough. I have giving away most everything that was not in my plans. I am big on Chalice corals but am a fan of both lps and sps. I love the simplicity of this tank. Its my first Red Sea. My wife is wondering how much longer before I add an even bigger tank.. The not so fun part is buying everything all over again.

BARcard
A few of the corals I kept

Wow! was that the path of the tank up into your place?

BARcard
My sympathies for the stairs…
i can relate

PjFish said:
Wow! was that the path of the tank up into your place?
Click to expand...

BARcard
Starting to add a few corals to the tank.
SPS Red Planet & Blue Sapphire Millie thanks to Dandemeyere
Red Goni & Mummy Eye Chalice thanks to Coral Reefer
Yellow & Green Pectrina thanks to Fish Doc
This journal will be more about how corals do in my tank , whats added , whats lost and upgrades that are done along the way. Going to add some more sps and would like to add some more goni's , torches. One thing I have to remember is this is a 135G and not my usual 200 plus gallon tank.

BARcard
@tankguy
Bob, I’ve got a frag tank for you...

Kensington Reefer said:
@tankguy
Bob, I’ve got a frag tank for you...
Click to expand...

BOD
BARcard
Just glad to have you back, Bob!

BARcard
What’s a journal without some pics. This may end up being my favorite chalice. Rainbow Crush

BARcard
Favia of the Gods

BARcard
This is one wrasse I’ve never had before and was glad to get the chance to grab it. The pic was not taken by me but it is the same fish. Like nearly all my fish it came from AC

BARcard
Update time
Im starting my conversion from the AI lights that came with the tank. Moving over to the Radion XR15's. Right now I have 2 Blues and am thinking of adding either 1 or 2 Pro's. Part of me wants to stick with just all blues. No particular reason other than thats the look I like. I'll make that final decision later down the road. More wrasses and corals have been added. Those who know me from my previous tanks know Im a huge wrasse fan. Since my last update Ive added
Choati ,
Male Leopard
Lineatus.
Corals Ive added
SPS
BC Brain Candy, Walt Disney, Colorblind from jhuynh
Bill Murray, Vivid Confetti , Cali Tort , Vivid Pink Passion - dandemeyere
Angry Birds Mike Diving The World R2R and local guy
Chalices
Bugatti , Atomic Bomb
Elegance - Matt Y 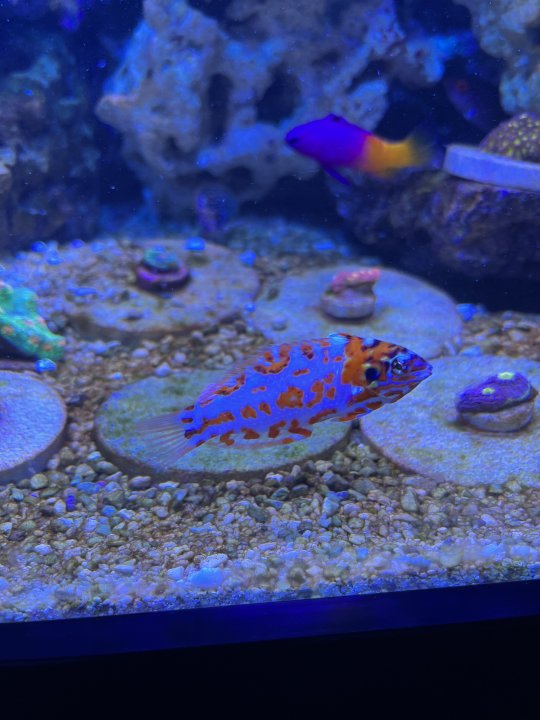 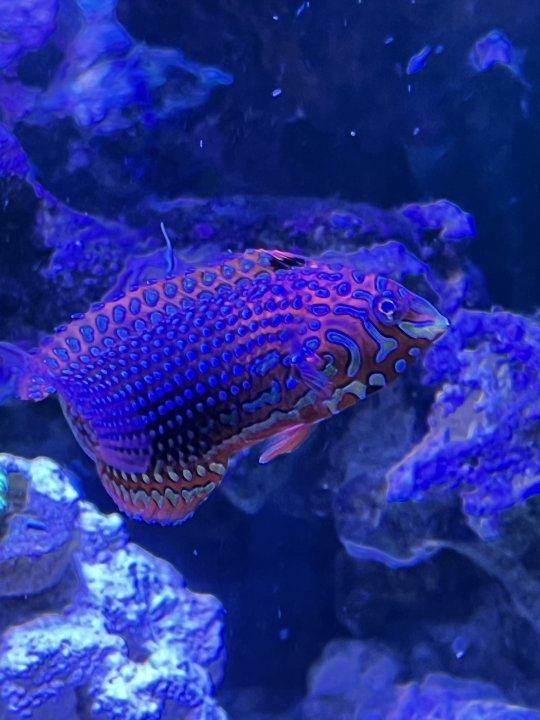 i can get you a frag tank when ready!!