How are your fish doing?

Chromis are notorious for being bought in groups like that and then killing eachother as they mature.

I only have 6 chromis, 2 clown and 1 azure in the tank right now. They are getting along surprising well. No fighting of any kind that i observed.

Success after 26hours! Well sort off. I click on ‘add raft’ option on the slicer tool. The raft practically fuse to the print. Oh well , the media chamber still fits, so I’m all good.

Pretty happy with the quality so far. Need to download more stuff to print.

Forgot to ask which brand filament did you get?

ashburn2k said:
Forgot to ask which brand filament did you get?

Thanks gonna try your brand with your temp setting

ashburn2k said:
Thanks gonna try your brand with your temp setting

Good luck I read up on the print speed, but gave up as I don’t even know how to change that on my printer! Haha 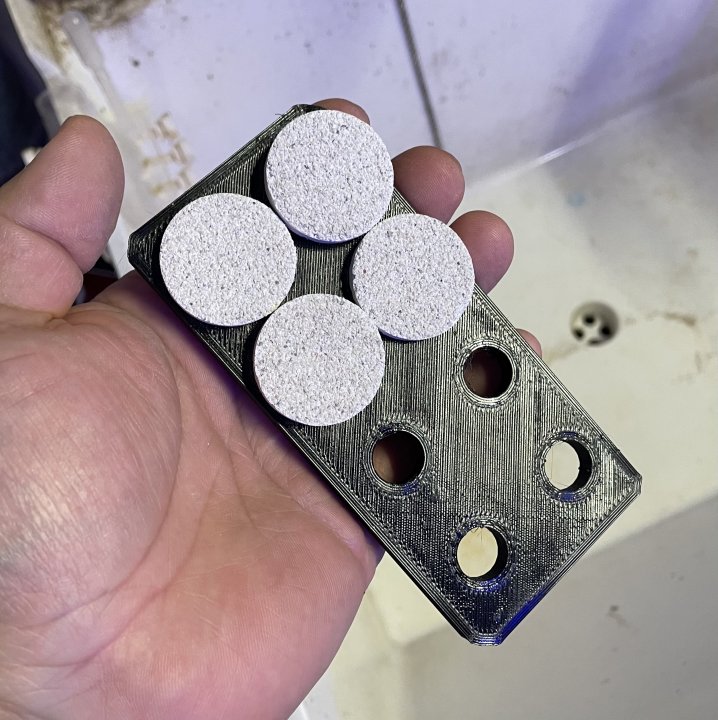 Good news: The media rack fits like a glove on the the Fluval 13.5.
Bad news : it fit like a very tight glove, and i cannot remove it now.

I;m almost done with the QT period, and i'll empty the tank and try to get the thing out.

You def don’t want it to fit too tight, imagine what will happen to your glass when it expand
N

ashburn2k said:
You def don’t want it to fit too tight, imagine what will happen to your glass when it expand
Click to expand...

I’m abit in a pickle right now. I have 5 more days to complete QT. Then I can try more options to remove the media rack

anyone have any idea how to remove a tight fit media rack? It seems to stuck pretty good.
Last edited: Apr 1, 2021

fill that section with water and ice, a lot of ice and hope that will somehow shrink the rack without breaking anything.
N

Purple Tang now in the DT after QT. Super shy fish even in QT by himself. In the QT, he is eating nori & PE pellets, but once diatoms (or whatever is brown algae like) grows in the QT, he is grazing on that and ignore the nori. Now in the DT, he seems much happier , dotting in and out btw the rocks when i'm not near the tank. Otherwise, he will be hiding in the rocks. Started grazing a few hours after introduce in the tank. He is not going after the pellets yet.

Other tankmates includes 6 chromis, 1 azure and 2 clowns. No sign of aggression. One of the larger clowns pick on the smaller one, as show of dominance. No injury per say, but in the last 2-3 months, the smaller one stop growing and the larger one is getting bigger by the day. I observed this behavior in my last pair of clowns that lasted 15+ years. There is 1 dominant fish that is twice the size. The azure is not picking on anyone. This is a good sign.

The chromis however is turning to wimp after i install the lights. I have the light set to very low intensity (~20W each). They used to happily swim around the tank, and now hides 90% behind the rock and only comes out for food. I was concern the azure is picking on them, but i did not see any aggression. In fact, during feeding, the chromis are dominating and azure only get "crumbs" that sink down and miss by the chromis. Hope the chromis will be brave again. The tank look empty with just the clowns and azure dotting around.

I still have 2 more azure ( known aggressor in QT) and 1 dotttyback ( mellow) in the QT. they are done with QT a while back, but i purposely hold back do they get introduce last. I'll add the dottyback first. I'm debating to find a new home for the 2 azure.

Any takers? Completed 30-days copper + GC + Metro treatment. They did pick on the 1 azure ( bought a trio), and chromis in QT.

Maybe coincident, but whatever. I'm happy to able to see more fishes swimming around.
N

Added the last fish, neon dottyback. No aggression so far in thank. Everyone seems to be happy for now. Tank is still bare with no coral. Chromis is out and about more.

Going to see i can bring the 2 azure back to LFS and trade for an urchin. If no go, i'll offer it to the members here. Decided not to add them to the main DT.

Going to clean up the QT, and can start QT coral and snails.

posted the azure in Pay in Forward section. Hope to find a good home for the pair.
N

First few frags in the QT. The mushroom disconnected with the plug. I just put it on a crevice on the rock.

15mins coral rx dip. I see some small worm like creatures wiggle out.

In a few days I’ll do a peroxide dip for algae, and the maybe another round of coral rx