I got the opportunity to help save a Dolphin Pet Village Bubble-tipped Anemone (DPVBTA). One of BARs members gave me this anemone to help restore it to its former glory.

This thread will be where I update and track the anemones progress.

Coral Strain Information
For those of you that don't know. the DPVBTA was a strain discovered by Dolphin Pet Village, a store that used to be in the SF Bay Area. They are purple bodied with green tentacles and a white base around the bulb. Here are some pictures of what they look like when healthy. This strain is hard to find nowadays. You almost never see them in our local fish stores. This used to be in BAR's DBTC but no longer; I knowsome of our veteran members still have this strain.

This Coral's History
According to the owner, he was BIG and very healthy. He was cut in half several times to propagate cloning (check out this old BAR thread on anemone propagation, SO COOL). The DPVBTA was in a tank with several clones. The anemone started to deteriorate in health after the owner added some rose bubble tipped anemones. The current belief is that there was either chemical warfare between the anemones or an anemone disease was introduced.

Ever since the DPVBTA started going downhill, his bubble tips are gone and he is very small compared to before. He is not taking in water and expanding as usual. The tips are still green slightly. His body is still purple as these DPVBTA normally are. He has been like this for well over 3 months.

He's still a strong anemone. He has no issues with grabbing onto a rock and moving around. He would move around sometimes in the previous owner's tank, but never expanded to the size he was. I have him in a deli container which I've drilled several large holes in for some flow.

Day 1 he didn't do anything, he opened up and reacted positively to the light.

Day 2 he expelled zooxanthanllae so I moved him to a shady-er part in my tank.

Day 6 he climbed out of the cup and went underneath it. My impression is that he doesn't watch much light now.

Today I put him back into the cup and put my tongs over the top of my tank giving him some shade. He's still getting hit with indirect light. If he moves tomorrow I'm going to let him roam. Just hope he doesn't kill any corals if he starts to move around 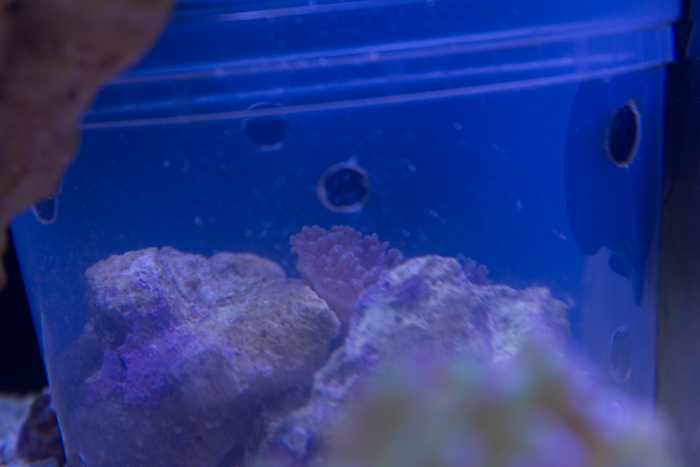 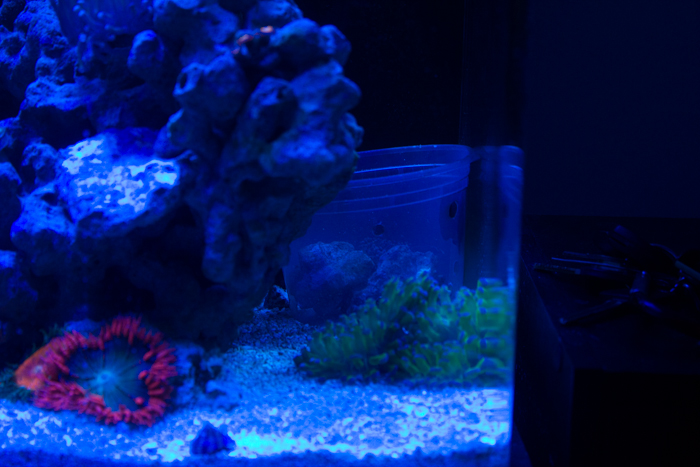 Lucky you....I was trying to get Tyler to sell me one out of the display tank but never got a chance to make the deal....

I hope it gets happier for you....

Wow that is a beautiful nem. Good luck with the rescue!

My RBTAs are bullet proof. They've survived crash after crash in the most inhospitable environments, regaining full composure within a few months. Let's hope this special one pulls through also.

I came home to find that he had climbed out of the plastic cup and was attached to the base of my frogspawn . No noticeable damage to either coral.

Luckily he was only partly attached. I removed him and put him in this hole in my live rock. He has the option of coming out for light or staying the hole. Much better access to flow. I'll just hope he finds a spot and hangs out without killing my coral Oh the joy of having a wandering anemone.

Luckily they don't move to much but they do from time to time as I have a good size one on my back glass now....so he is easy to remove and sell/trade when the time comes....lol

My rose bubble tipped stayed put for 1 month and moved to a new spot and has stayed there for over 6 months, but he was bubble tipped and happy almost all the time.

Don't get me wrong I don't like them to move except to be able to remove and sell....lol

My main one has stayed put for over 6 months now which is good but the others sometimes decide to wonder....lol
M

neuro said:
My RBTAs are bullet proof. They've survived crash after crash in the most inhospitable environments, regaining full composure within a few months. Let's hope this special one pulls through also.
Click to expand...

I am still friends with Tyler if you need more info. I know I have seen this bta in direct sunlight and it had bright white tips on it.

How is Tyler doing...where is he located now???

From his Facebook posts he is ok. He is still in the area.

@Apon ...Arnold thanks for the update...

He still does some servicing of tanks too.
M

Following along as this thing is all kinda of sexy


The good news? I picked up a dolphin pet village anemone that's healthy from a local reefer in the peninsula.

Is it moving a lot...no natural splitting into two?

Well jon my plan was to give you the first frag as DBTC. If youre interested?

Hes been like this for months. I feed him too. He doesnt move. 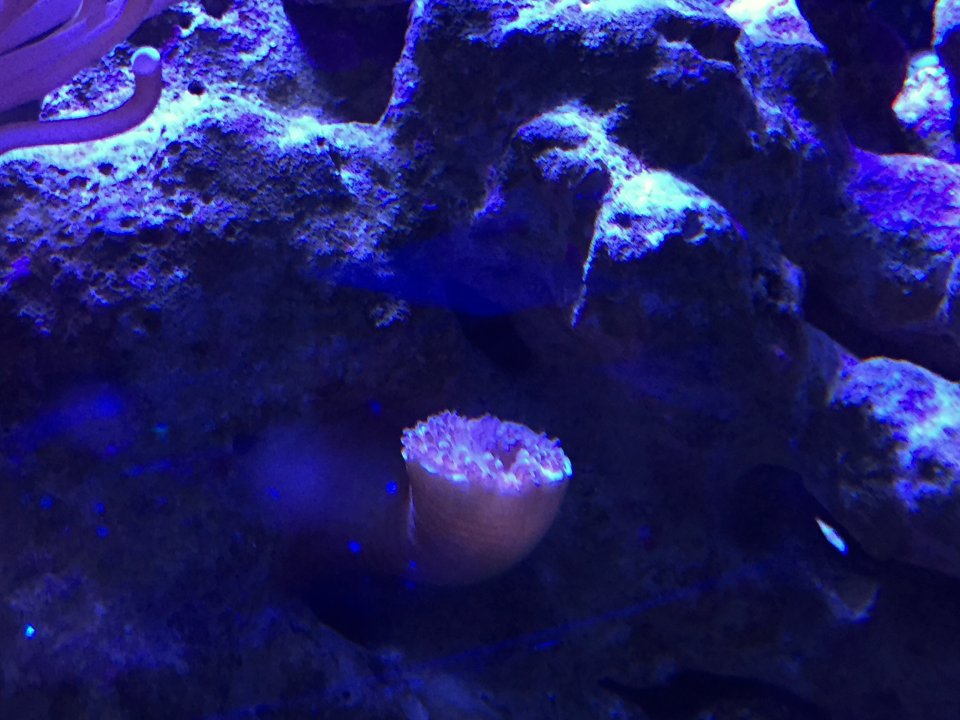 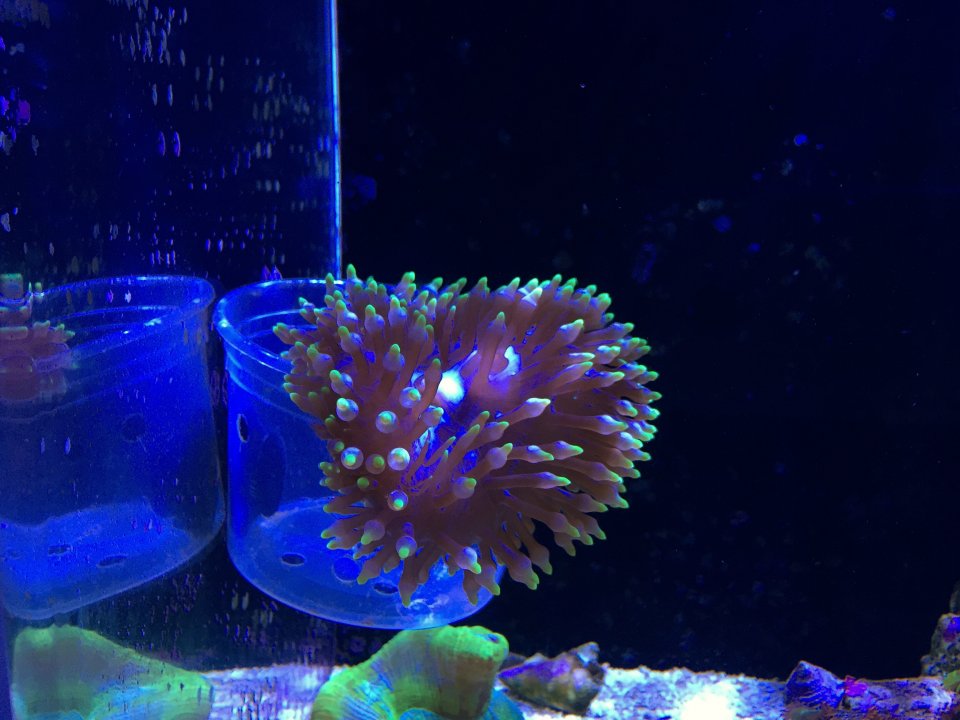 Enderturtle said:
Well jon my plan was to give you the first frag as DBTC. If youre interested?
Click to expand...